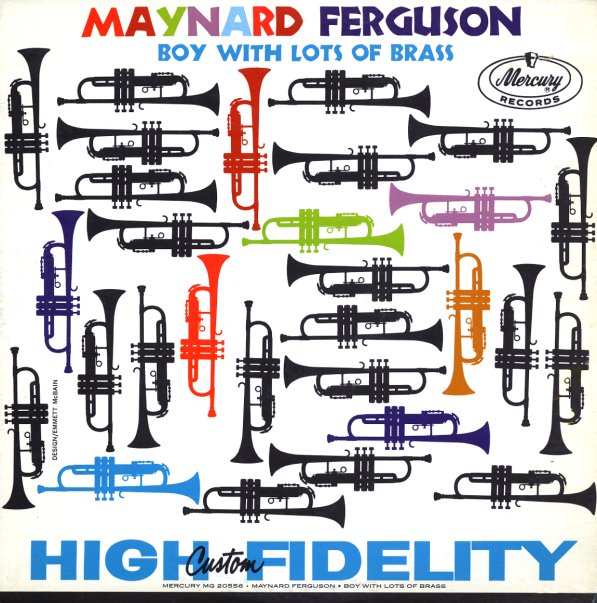 Boy With Lots Of Brass

There's definitely lots of brass here – as you might guess from the title – but never so much so that it gets in the way of individual soloing by Maynard Ferguson! The date features Maynard working with arrangements by Willie Maiden, Al Cohn, Ernie Wilkins, and Bill Holman – all for a largeish group that's wonderfully hip – Bobby Timmons on piano, Anthony Ortega on alto, Jimmy Ford on alto and tenor, Willie Maiden on tenor, Tate Houston on baritone, Richard Evans on bass, and Larry Bunker on drums – plus some added trumpets and trombones! Maynard himself plays both instruments on the date, and the album also feature some surprising guest vocals by Irene Kral on 4 tracks – spicing up the instrumental blend with lyrics on "Moonlight In Vermont", "I Hadn't Anyone Till You", "Imagination", and "The Song Is You". Instrumental tracks include "Jeepers Creepers", "I Never Knew", "A Foggy Day", "Love Me Or Leave Me", and "The Lamp Is Low".  © 1996-2022, Dusty Groove, Inc.
(Black label stereo pressing with deep groove. Cover has light wear.)

Sil Austin Plays Pretty For The People
Mercury, Early 60s. Very Good+
LP...$6.99
No honking here, as Sil Austin takes his deeply soulful tenor sax, and turns it to a set of creamy late-nite tracks – all done over some very "pretty" backings, ala the Verve strings work of Ben Webster or Lester Young. Most cuts have voices in with the orchestrations – and ... LP, Vinyl record album

Mambo Moves
Mercury, Late 50s. Near Mint-
LP...$19.99
A great LP of Latin-y piano tracks with Candido sitting on on congas – an element that makes the album groove nicely, with a harder Latin sound than you'd ever expect! Great stuff all around – and we wish he'd recorded more like this! Titles include "Mambo Nights", "Old ... LP, Vinyl record album

Friends & Love – A Chuck Mangione Concert (single LP)
Mercury, 1970. Sealed
LP...$7.99
A really fantastic moment for hornman Chuck Mangione – one that shows the larger concepts that he and brother Gap were developing in the Rochester scene in the late 60s – served up here with some full orchestral backing next to Chuck's flugelhorn, and great guest work from Gap Mangione ... LP, Vinyl record album

Kirk In Copenhagen (Trip pressing)
Mercury, 1963. Near Mint-
LP...$9.99
A rare slice of work by Roland Kirk from his early years – a great live set recorded in Europe in the mid 60's – done in a looser mode than his studio sessions from the time! Kirk's playing his usual array of incredible horns – tenor, stritch, flute, nose flute, and manzello ... LP, Vinyl record album

Moon Faced & Starry Eyed
Mercury, 1959. Very Good+
LP...$24.99
One of Max's many great records from the late 50's, most of which tend to get overlooked in favor of his more experimental sessions. The group here includes Ray Bryant, Stanley Turrentine, Julian Priester, and Turrentine's great brother Tommy – and they're joined by Abbey Lincoln on vocals ... LP, Vinyl record album

Oscar Peterson Trio + One
Mercury, 1964. Very Good
LP...$13.99 (CD...$3.99)
Oscar Peterson's trio is augmented here by a famous guest – trumpeter Clark Terry, whose horn adds a nice bit of punctuation to the set, and makes the record a strong standout in the 60s catalogs of both players! The addition of Terry to the record is a great one – as Clark's rising ... LP, Vinyl record album