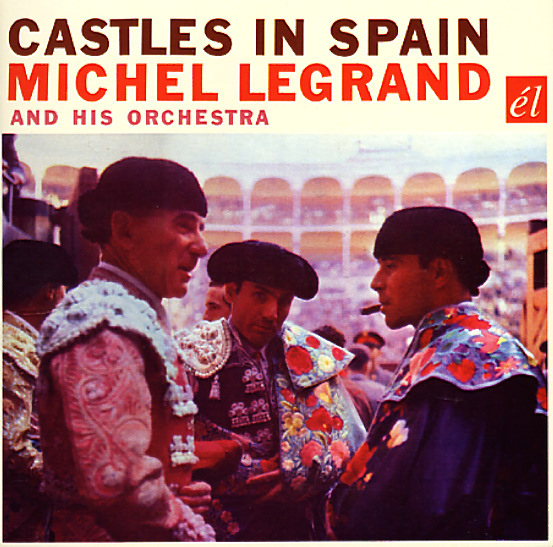 One of the great early albums in Michel Legrand's "travelogue" period – a set done at the same time as his musical portraits of Paris and Rio, and served up with a similar flair for the dramatic! The style here is somewhat different than Legrand's better-known soundtrack work of the 60s – and like his other travelogue albums, the record is sort of an imagined version of Spain – a musical fantasy of the country, served up in a style that mixes fuller orchestrations with some lighter, more isolated instrumental moments. There's a fair bit of acoustic guitar alongside the strings, and also some Spanish-styled rhythms at times – never too dramatic, but enough to help the overall flavor of the project. Titles include "Andaluza", "Espana", "La Danse Du Feu", "Espana Cani", "El Choclo", "El Gato Montes", and "Sant Marti Del Canigo".  © 1996-2022, Dusty Groove, Inc.
(Red label Japanese pressing, in a flip-back cover, with a small rip on the opening and a price sticker remnant.)

Miles & Monk At Newport
Columbia, 1958/1963. Very Good+
LP...$11.99
A slightly misleading record – but a great one nonetheless! From the title and cover, you might imagine that Thelonious Monk and Miles Davis were sharing the stage together at the Newport Jazz Festival – but instead, the album actually features separate performances by each artist ... LP, Vinyl record album

Fathers & Sons
Columbia, 1982. Near Mint-
LP...$7.99
A split album, with a quintet headed up by Ellis Marsalis with sons Branford and Wynton, and Von Freeman with his son Chico playing with a quintet on the flip! LP, Vinyl record album

Elegant Gypsy
Columbia, 1977. Near Mint-
LP...$7.99 (CD...$4.99)
A set that features Al DiMeola moving into some very dynamic territory – jamming out heavy on a mix of electric and acoustic guitars, with additional help from Paco DeLucia on acoustic at points. The instrumentation also features heavy electric piano from Jan Hammer, other keyboards from ... LP, Vinyl record album

Future Shock
Columbia, 1983. Near Mint-
LP...$13.99
The future is now! Or at least it seemed to be back in 1983 when Herbie teamed up with Bill Laswell to record this classic album of computer-driven keyboard grooves! Whatever you might think of the music, the record was a genius move for Herbie – who was kind of flopping around in a number ... LP, Vinyl record album

Jazz Mass
Columbia, 1966. Near Mint-
LP...$1.99
A pretty darn cool album – even though you might not initially guess it! Joe Masters takes the Catholic mass, in Latin, and sets it to some swinging jazz arrangements – played by a small soulful combo that includes Anthony Ortega, Harold Land, and Mike Wofford, and fronted by a vocal ... LP, Vinyl record album