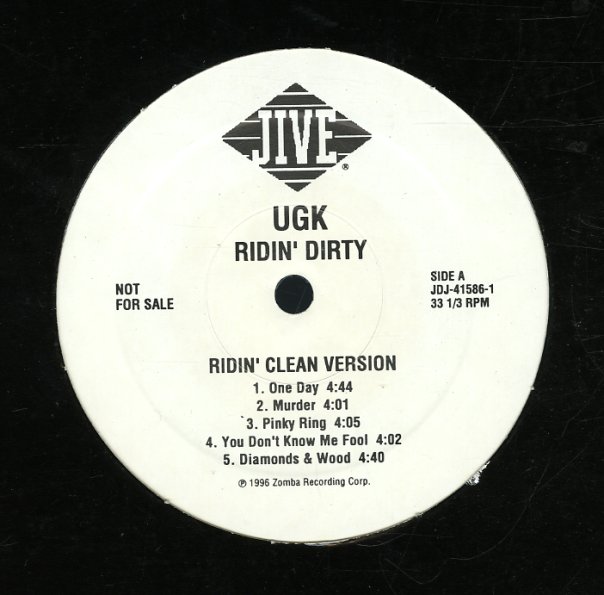 The mid 90s classic from Underground Kingz – they're commerical breakthrough, with all the uncompromising grit of their first few records on the lyrical tip, albeit with a stripped down soulful resonance to a lot of beatcraft. The gritty rhymes is the unifying element here, with tracks that split the difference between lean, crisply bouncing, hard-hitting production and surprisingly soul and funk steeped tracks. It works great on both sides of that style divide, and it's little wonder that made such a big impact at the time. Stands the test of time, too. 10 clean edited tracks: "One Day", "Murder", "Pinky Ring", "You Don't Know Me Fool", "Diamonds & Wood", "3 In The Mornin'", "Touched", "Ride My Car", "Good Stuff" and "Ridin' Dirty".  © 1996-2021, Dusty Groove, Inc.
(Clean edited promo in a stickered sleeve.)

How Ya Like Me Now
Jive, 1987. Near Mint-
LP...$19.99
Kool Moe Dee's second album – a benchmark moment in mid-to-late 80s solo rap – and definitely worth a post millennium revisit! The title cut is a prime relic of the Kool Moe Dee vs. LL Cool J battles back in the day, and that along with "Wild Wild West" are bonafide classic ... LP, Vinyl record album

Low End Theory (2LP pressing)
Jive, 1991. Very Good+ 2LP
LP...$39.99 (CD...$6.99)
The second album from the immortal Tribe Called Quest – one of the absolute essential hip hop LPs, and a record that should be an anyone's shortlist of the best albums in several subsections of hip hop – just a straight up masterpiece anyway you cut it. The album is so high up on the ... LP, Vinyl record album

Top Secret Beats Vol 3
Freeze, 1992. Very Good+
LP...$6.99
Stripped down beat tracks, some of them just drums, some of them drums plus a loop or two. Identified only by their BPMs, no titles, 10 tracks in all. LP, Vinyl record album