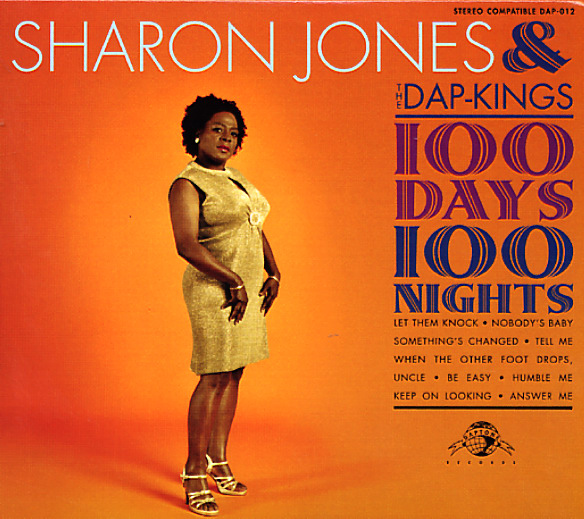 They might be borrowing her band, but they sure can't dampen her soul – because Sharon Jones is strongly back in action, and sounding funkier and more deeply soulful than ever! Given that Sharon wasn't singing back in the 60s, it's hard to think we'd be calling her the real deal – but in a world of crossover classic-copping soul singers, or slightly rewarmed older acts, Jones is a true treat through and through – the kind of soul singer whose work still recalls the best era of the funky 45 underground! The mighty Dap-Kings are in full force here – snapping along the groove with a range of classic soul influences – styles borrowed from Memphis, Miami, Muscle Shoals, and more – all sifted down to some of the tightest grooves any singer ever had the chance of working with! The production is amazing – as sharp-edged as the music – and handled by Bosco Mann with a sound that's as faithful to the roots as the cover might imply. Titles include "100 Days 100 Nights", "Tell Me", "Be Easy", "Nobody's Baby", "When The Other Foot Drops Uncle", "Something's Changed", "Keep On Looking", "Answer Me", and "Humble Me".  © 1996-2023, Dusty Groove, Inc.

Exciting Sounds Of Menahan Street Band
Daptone, 2021. New Copy
LP...$16.99 18.99
The Menahan Street Band are always pretty exciting to our funk-trained ears – but this time around, there seems to be a little something extra in the mix – a sound that has all these great little strange twists and turns around the edges, while still keeping all the mellow funk of the ... LP, Vinyl record album

Crossing (with bonus download)
Daptone, 2012. New Copy Gatefold
LP...$15.99 18.99
Sublime work from one of the coolest funky combos around – a group who aren't content to just hit the same funky styles as other outfits – and one who really stretch strongly in their pursuit of new sounds! The set's definitely funky – especially on the drums – but there's ... LP, Vinyl record album

Soul Of A Woman (with download)
Daptone, 2017. New Copy
LP...$16.99 18.99
The fantastic final album from Sharon Jones – a wonderfully deep talent who was taken from us all too soon! The set's maybe the ultimate setting for Sharon's incredible voice – as it features both her longtime core combo, the Dap-Kings – as well as additional backings from the ... LP, Vinyl record album