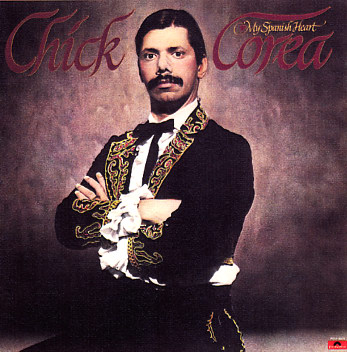 Given that Chick Corea first got his start working in the New York Latin scene back in the 60s, the album's a bit of a return to his roots – even if the general theme here is Spanish, and not Afro-Cuban! The Corea Spanish Heart here is cast in some darker, more contemplative tones than more traditional Latin sides – but it borrows a wonderful array of modes from genres past – including bits of strings, percussion, and an overall more ambitious approach that sometimes shows up in Chick's piano work, or in the general construction of the tunes. The double-length set features a wide variety of Spanish-influenced numbers – played by Corea on acoustic piano and a variety of keyboards, with other players who include Don Alias, Jean Luc Ponty, Stanley Clarke, and Steve Gadd. Titles inclu de "Love Castle", "The Gardens", "Night Streets", "The Hilltop", "Armando's Rhumba", "Prelude To El Bozo", "Spanish Fantasy", and "My Spanish Heart".  © 1996-2022, Dusty Groove, Inc.
(In the textured cover. A great copy!)

Secret Agent
Polydor, 1978. Near Mint-
LP...$11.99 (CD...$18.99)
A sweet little set from Chick Corea – one that's got a bit of a Return To Forever vibe at times, but maybe taken down into tighter territory overall – which makes for pure jazz funk greatness throughout! Some tunes have a nice sense of groove – the choppy fusion of RTF, but more ... LP, Vinyl record album

Extrapolation
Polydor, 1968. Near Mint-
LP...$99.99
Most likely our favorite album by John McLaughlin – and one that features him in a wonderfully spare setting – alongside John Surman on saxes, Brian Odges on bass, and Tony Oxley on drums. The playing has a free and loose quality that McLaughlin would later lose on some his more fusion- ... LP, Vinyl record album

Gil Evans
Ampex, Early 70s. Near Mint-
LP...$16.99
A great record – and on that hardly ever shows up on the radar screen of Gil's career! The session was recorded with a very hip group that includes Billy Harper on tenor and flute, Elvin Jones and Alphonze Mouzon on drums, Joe Beck on electric guitar, and Herb Bushler on Fender bass. The ... LP, Vinyl record album

All Night Session Vol 3
Contemporary, 1956. Near Mint-
LP...$24.99
A noteworthy session from pianist Hampton Hawes – a rare quartet session from the 50s (at a time when Hawes was mostly working in trios) – and also a three volume set of releases, all recorded in the space of a single night! The album is truly an All Night Session – as the ... LP, Vinyl record album