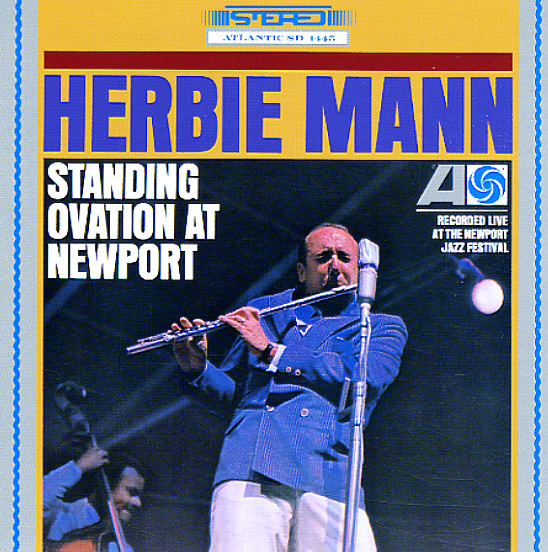 Herbie Mann got a standing ovation for this performance – at least if the title is to be believed – and considering the grooves on the set, it was all for very good reason! The album's one of the few to feature Mann in the company of pianist Chick Corea – who steps out here with some hard, soulful, Latin-inflected energy that's totally great – and which really makes the group cook. Other players include Dave Pike on vibes and Patato Valdes on congas – and the great Ben Tucker joins the group on an extremely popular 10 minute version of his composition "Comin Home Baby", one of Herbie's all-time hits. The format is very much in that best live performance style of Herbie's best records of the 60s – very open and freewheeling – and other tracks are equally long and jazzy, with titles that include "Mushi Mushi" and "Patato".  © 1996-2021, Dusty Groove, Inc.
(Pink & brown label pressing with deep groove.)

Herbie Mann & Fire Island
Atlantic, 1977. Very Good+
LP...$2.99
A sweet little disco set from Herbie Mann – recorded in collaboration with the Fire Island soul vocal trio! The group's got a sound that's kind of compelling – not as sweet or smooth as some of the other disco trios of the time, and with an approach that almost has the voices moving in ... LP, Vinyl record album