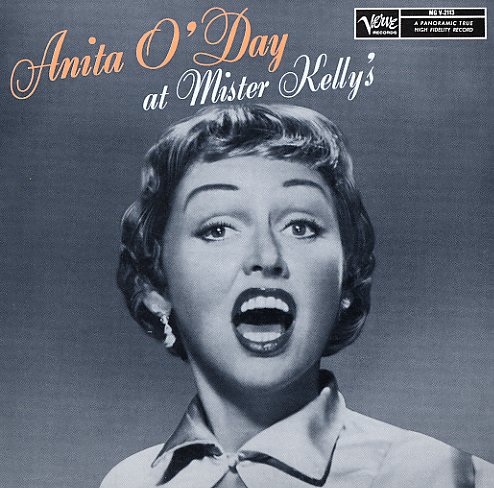 Anita O'Day is fast and free in this live set recorded at Chicago's famous Mister Kelly's nightclub – a venue that gives the recording a nice intimate feel! As with many of her Verve sides, Anita dominates the set with her wit, warmth, and personality – working the crowd as much as an entertainer as a singer, and giving the record a direct approach that's quite different from torchier vocal sessions of the time. Backing is by a piano trio – and titles include "Tea For Two", "Star Eyes", "Have You Met Miss Jones", "The Song Is You", "Every Time I'm With You", and "But Not For Me".  © 1996-2021, Dusty Groove, Inc.
(Early 80s Japanese Polygram pressing, UMV 2550, with obi.)

My Ship
Emily, 1975. Near Mint-
LP...$11.99
Great small combo work from Anita O'Day – done at a time when the singer had maybe faded from the American limelight a bit, but continued to do some really exceptional work for a variety of smaller labels! In fact, we might even say that Anita during this stretch was even hipper than before ... LP, Vinyl record album

Pick Yourself Up With Anita O'Day
Verve, 1956. Very Good+
LP...$14.99
Buddy Bregman's doing the arrangements on this one – and he brings a great jazzy flair to the backings, helping Anita O'Day open up in her most dynamic mode! The whole set swings nicely, but without any sort of hoke – and Bregman manages to highlight specific instruments in the ... LP, Vinyl record album

Ella Fitzgerald Sings Sweet Songs For Swingers
Verve, 1958. Very Good+
LP...$11.99
A nice one from Ella – and a good move past the Songbooks mode that sometimes dogged her years on Verve a bit too much! This set has Ella singing to light arrangements by Frank DeVol – nothing fancy, but a good set of tunes that are perfect for the lovely style that Ella was hitting ... LP, Vinyl record album

I Dig The Duke – I Dig The Count
Verve, Early 60s. Very Good+
LP...$2.99
An overlooked gem from Mel Torme's years at Verve – an album dedicated to the music of Duke Ellington and Count Basie, set to some very upbeat, jazzy backings from Johnny Mandel! The album's quite swinging at points – and given the choice of material, Mel really breaks from the ... LP, Vinyl record album