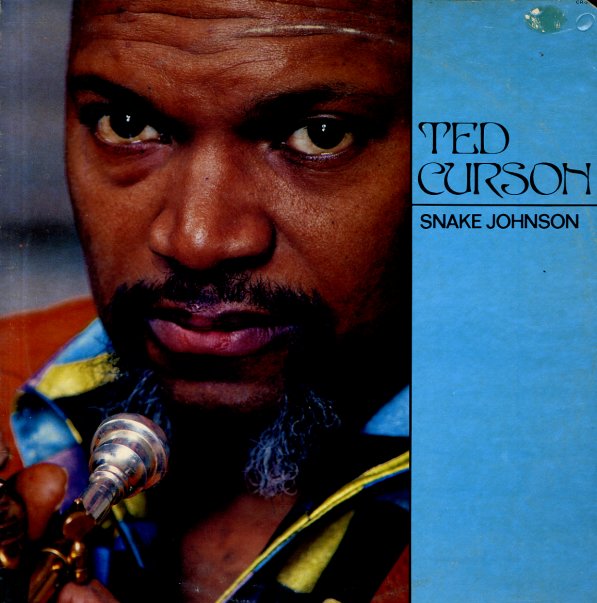 A strong little album from Ted Curson – one of his best from the time, and one of the few that feature him working in a group that's larger than a quartet! Players on this one include Ted's old partner Bil Barron on tenor, plus Nick Brignola on baritone and soprano, Charles Williams on alto, Jim McNeeley on piano, Lawrence McKillian on percussion, and Steve McCall on drums. The album's kind of in a bluesy modern mode – an extension of some of Curson's groundbreaking 60s work, with solos that rip a bit far out, but rhythm that's always swinging and straight ahead. Titles include "Marjo", "Snake Johnson", "Blue Piccolo", "Dwackdo Mun Fudalik", and the jazzy dancer "LSD, Take A Holiday".  © 1996-2020, Dusty Groove, Inc.
(Cover has a small corner cut.)

Blue Piccolo (80s issue)
Why Not (Japan), 1976. Near Mint-
LP...$29.99
One of the hippest records ever cut by trumpeter Ted Curson – and that's saying a lot, because all his records are pretty darn hip! Curson's working in a quartet with Jim McNeely on piano, Cecil McBee on bass, and Steve McCall on drums – and the group's a lot tighter than some of ... LP, Vinyl record album

Ted Curson & Co (aka Blue Piccolo)
India Navigation, 1976. Near Mint-
LP...$34.99
One of the hippest records ever cut by trumpeter Ted Curson – and that's saying a lot, because all his records are pretty darn hip! Curson's working in a quartet with Jim McNeely on piano, Cecil McBee on bass, and Steve McCall on drums – and the group's a lot tighter than some of ... LP, Vinyl record album

Jivin' With The Refugees From Hastings Street
Chiaroscuro, 1977. Near Mint-
LP...$5.99
With Eddie Locke on vocals, Tommy Flanagan on piano, Major Holley on bass and vocals, Oliver Jackson on drums, and Dan Morganstern on police siren. LP, Vinyl record album

Black Lightning
Chiaroscuro, 1976. Very Good+
LP...$11.99
An album that was issued in the US, but which actually features excellent work that Abdullah Ibrahim/Dollar Brand recorded for the Gallo label in South Africa – the kind of edgier work that we often prefer next to some of his solo and trio material! The key force here is the horns – as ... LP, Vinyl record album

Buddy Tate Meets Dollar Brand
Chiaroscuro, 1977. Very Good+
LP...$9.99
A wonderful record based around a brilliant concept! Buddy Tate is a hell of a tenor player – with a tone that's up there with Rollins, Coltrane, and other giants – but his frequent recording patterns usually have him in less adventurous swing-based sessions, ones that don't get him to ... LP, Vinyl record album