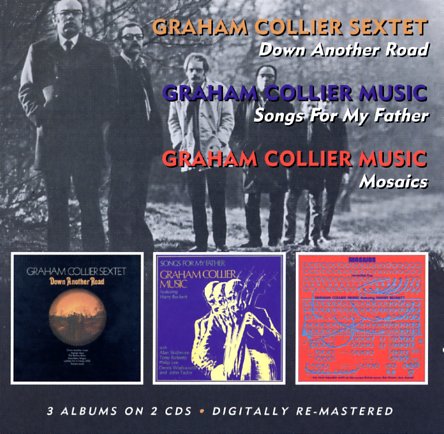 3 incredible albums from the British jazz scene at the end of the 60s – all together in one 2CD package! Down Another Road is incredible work from one of England's greatest jazz talents – bassist Graham Collier, a player with an amazing ability to absorb a lot of the modern and progressive influences of his jazz generation – but all without succumbing to the same indulgences as them – a fact which resulted in a razor-sharp style that forged some of the freshest jazz ever to come out of the UK. This 1969 album is a masterpiece – filled with a modal groove and a strident searching theme, yet also as tight and grooving as most of the best Blue Note sessions from the same time. Harry Beckett's on trumpet, Nick Evans is on trombone, John Marshall plays drums, and Stan Sulzmann handles the reeds. Tracks include "Down Another Road", "Danish Blue", "The Barley Mow", and "Aberdeen Angus". Songs For My Father is a masterpiece of modernist soul jazz, with a sound that recalls the best late Blue Note work by Lee Morgan or Hank Mobley. Alan Wakeman's tenor is perfectly pitched, and searingly searching; Harry Beckett's trumpet is round, lyrical, and filled with soul; and the piano of John Taylor comps along in chunky modal grooves that make the whole album fall together brilliantly. Tracks include "Song One", "Song Two", "Song Three", etc – and they're all fantastic! Mosaics is a wonderfully searching session – filled with warm McCoy Tyner-esque modal moments, and searing post-Coltrane solos! The album comprises one long piece – Collier's "Mosaics" – performed live by a group that includes Alan Wakeman on tenor and soprano, Harry Beckett on trumpet, and Geoff Castle on piano. "Mosaics" has that amazing mid 60s Coltrane quality of going out in a spiritual kind of way – yet always returning to the groove, never getting too free, and always remaining firmly focused on the direction ahead. All players are great, and the record crackles with the intensity of a classic session on Impulse!  © 1996-2022, Dusty Groove, Inc.