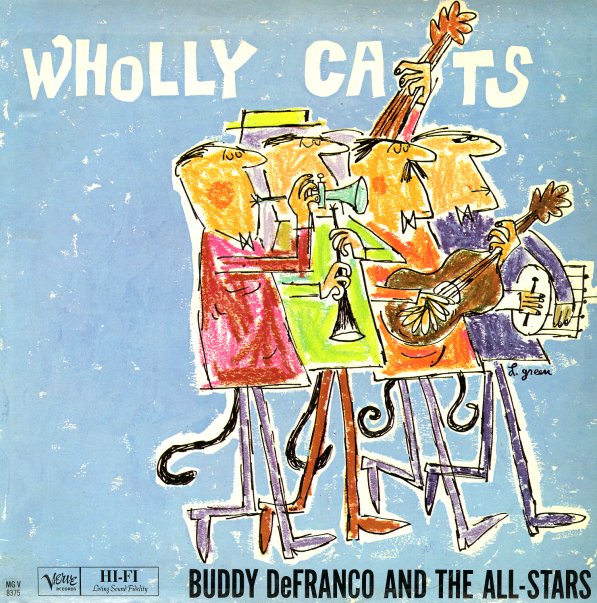 Older tunes, redone beautifully by Buddy DeFranco – in a sweetly open-ended style that makes the album one of his best for Verve! The album was done in 2 different sessions – one with Ray Linn on trumpet, Jimmy Rowles on piano, and Barney Kessel on guitar – the other with George Auld on tenor, Don Fagerquist on trumpet, Victor Feldman on vibes, and Carl Perkins on piano. Buddy's on clarinet throughout, playing with a lean, clean line that's a great link between older uses of the instrument, and some of the modern tones coming from Jimmy Giuffre in the 50s. Tracks are relatively open-ended and easygoing, and titles include "More Than You Know", "Wholly Cats", "Night & Day", "I Surrender Dear", and "Smoke Gets In Your Eyes".  © 1996-2020, Dusty Groove, Inc.
(Stereophonic pressing with deep groove. Cover has some notes in pen on back and some discoloration from age.)

Live Date
Verve, 1958. Very Good+
LP...$14.99
A very hip session that has Buddy working with some of the fresher modern players on the scene at the time – all in a groove that echoes with some of the sharpest notes we've heard from his clarinet in the 50s! The ensemble has a really dreamy feel – with flute from Herbie Mann, vibes ... LP, Vinyl record album