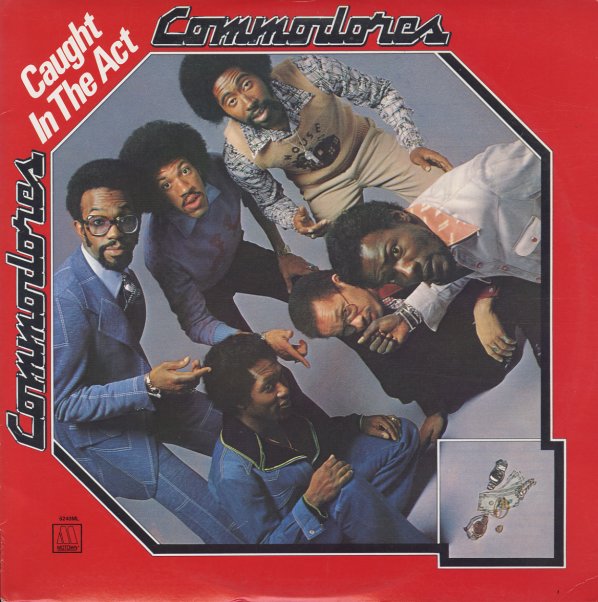 Wicked early funk from The Commodores – a group that spent so much time on pop ballads in later years, it's hard to believe they could be this sharp and hard-edged! There's plenty of that bass-heavy style that would later dominate many Motown combos at the end of the 70s – but the group's really in control of the groove on this one, without any of the cliches that such bassery could lead them into – and production is nicely restrained, so that the whole thing has the loose, live feel of some of the best ensemble funk of the time – even some of the gems from the underground. Lionel Ritchie contributed one nice smooth soul number, "This Is Your Life", and the rest of the album includes "Let's Do It Right", "Wide Open", "The Bump", "Look What You've Done To Me", and the funk classic "Slippery When Wet".  © 1996-2022, Dusty Groove, Inc.
(Cover has light wear.)

Midnight Magic
Motown, 1979. Very Good+
LP...$6.99
Lots of Midnight Magic from The Commdores – still nice and funky at the start of the evening, but also chilling out in the wee hours too – really finding a great way to follow the trajectory of the night with the tracks in this set! The album sparkles with strong arrangements and ... LP, Vinyl record album

In The Pocket
Motown, 1981. Near Mint-
LP...$8.99
An album that definitely lives up to the title promised by The Commodores – a record that takes all their raw funky energy of the early years, and fuses it into a new groove that would catapult the sextet to superstardom! The sound is commercial, but still has a pretty fresh sort of feel too ... LP, Vinyl record album

Bit Of Liverpool
Motown, 1964. Very Good+
LP...$29.99
It's always interesting to note the way that Berry Gordy tried to move Motown out of the ghetto of US soul indies, by attempting various moves to realign the music with other spheres bigger than the scope of Detroit soul. Sometimes these moves were clear "loss leaders" that wouldn't ... LP, Vinyl record album

Anthology
Motown, 1960s/Early 70s. Near Mint- 3LP Gatefold
LP...$39.99
Killer 3LP set that brings together just about every single track you'd ever want from Marvin's early years at Motown! The gamut runs from early pop singles to the politically progressive work of his What's Going On years. Titles include "You're The Man", "Trouble Man", "I ... LP, Vinyl record album