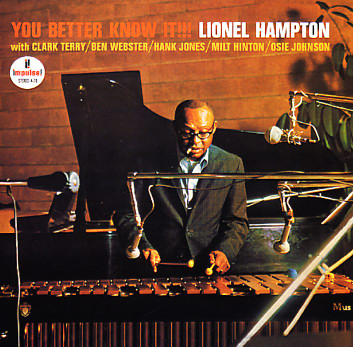 A warm and wonderful 60s session from Lionel Hampton – recorded in a personal and intimate way, one that even surpasses his great small combo sides of the 50s! There's a relaxed feel here that you don't always get with Hamp – a gently grooving quality that we really like a lot, and which is traditional, but never too staid or too "easy" in its choices. The set benefits from some really strong horn work from Clark Terry on trumpet and Ben Webster on tenor – the latter of whom really crackles out with a great sound here. Other players include Milt Hinton on bass, Hank Jones on piano, and Osie Johnson on drums – and there's also a very slight bit of vocalizing on the record as well. Titles include "Tempo's Birthday", "Vibraphone Blues", "Trick Or Treat", "Cute", "Swingle Jingle", and "Taste Of Honey".  © 1996-2021, Dusty Groove, Inc.
(Orange & black label stereo pressing Van Gelder stamp. Cover has a small sticker.)