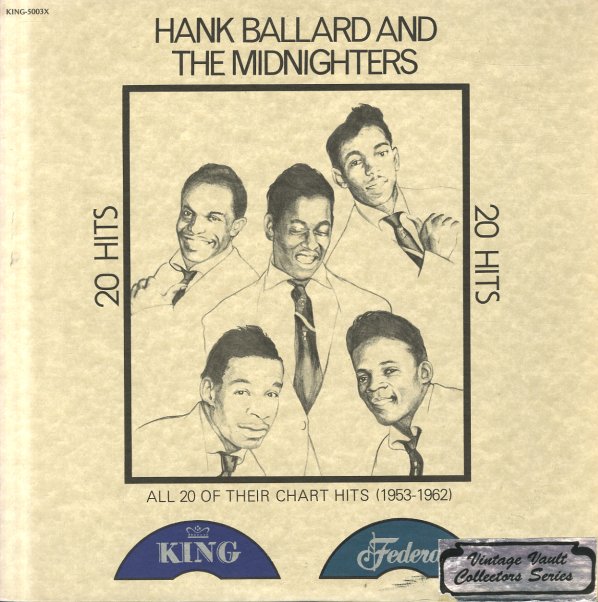 A classic set of hard rockin R&B from Hank Ballard and the legendar Midnighters – as raw a batch of vocal group tracks you'd be hard pressed to find! The album features plenty of tunes from their "Annie" cycle of songs – including "Work With Me Annie", "Annie Had A Baby", "Annie's Aunt Fanny", and "Henry's Got Flat Feet" – plus gems that include "Sexy Ways", "Get It", "Finger Poppin' Time", "Let's Go, Let's Go, Let's Go", "Let's Go Again", "The Continental Walk", "The Switch-A-Roo", "The Float" and "Keep On Dancing".  © 1996-2022, Dusty Groove, Inc.
(Red label Gusto pressing. Cover has light surface wear & aging.)

Live At The Apollo
King, 1963. Very Good+
LP...$39.99 (CD...$3.99)
A landmark album that forever changed the face of live recordings – and soul music too! As has been told and retold often, King records not only had the genius idea of bringing recording equipment into the Apollo Theater to catch James in a smoking live setting – the sort of show that ... LP, Vinyl record album

Live And Lowdown At The Apollo – Vol 1
King/Solid Smoke, 1963. Near Mint-
LP...$14.99
Later reissue of this landmark album that forever changed the face of live recordings! As has been told and retold often, King records not only had the genius idea of bringing recording equipment into the Apollo Theater to catch James in a smoking live setting – but they also went out of ... LP, Vinyl record album