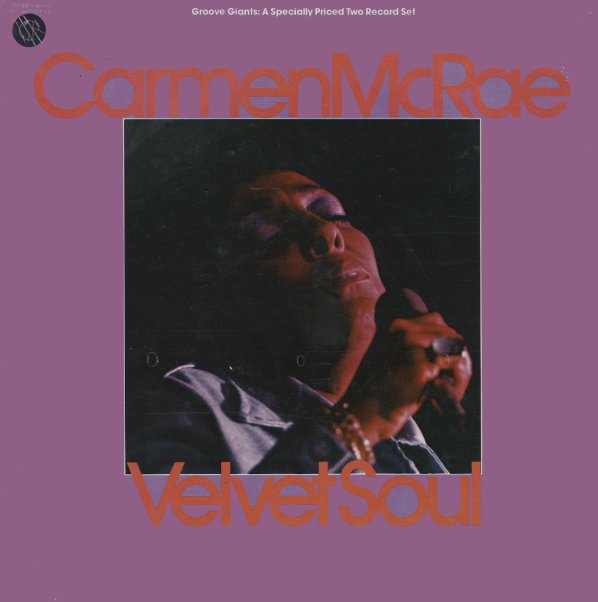 This double-length set brings together two albums' worth of work that Carmen McRae recorded for the Groove Merchant label in the early 70s! The style here is strongly jazzy, but with a firm dose of soul too – all in a mode that follows nicely from Carmen's late 60s sessions for Atlantic Records, but with a sound that's almost even more focused and in the pocket. The band is largeish, but the rhythms are tight – and even the mellower tunes seem to have a nice sort of lilt at the bottom, one that goes great with the way that Carmen spaces out her vocals on the set. Players include Joe Pass on guitar, Larry Bunker on vibes, Zoot Sims on tenor, and Dick Shreve on piano – and the CD features 19 tracks that include "Hey John", "Inside A Silent Tear", "The Right To Love", "You & I", "Sunshine Of My Life", "The Good Life", "It Takes A Whole Lot Of Human Feeling", "Livin", "Masquerade", "You're Mine You", and "There Will Come A Time".  © 1996-2022, Dusty Groove, Inc.
(Cover has masking taped seams, ring wear, cutout notch, edge wear.)

I Want A Country Man
Groove Merchant, 1973. Near Mint-
LP...$4.99
Very hip work from Dakota Staton – one of her great early 70s albums for the Groove Merchant label! Backings here are by the band of Manny Albam – in a mode that's jazzy, but inflected with plenty of soul – and which has the same sort of rhythmic pulse that you'd find in Lou ... LP, Vinyl record album