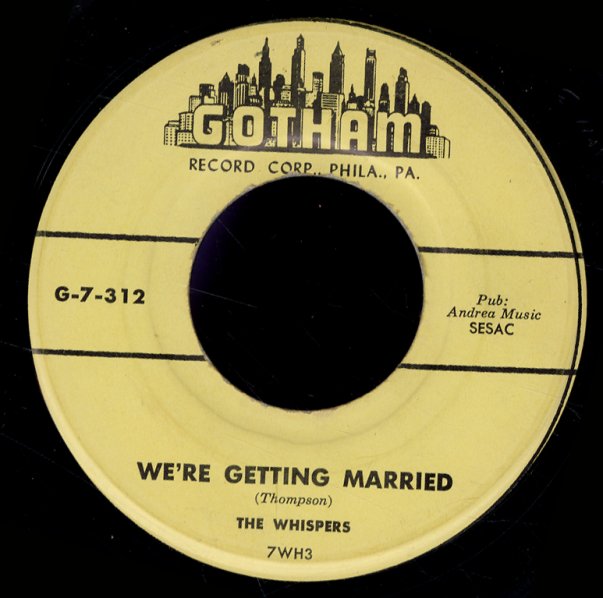 We're Getting Married/Are You Sorry?

Rare work from an early version of The Whispers – a Baltimore group, not the later famous west coast act!  © 1996-2022, Dusty Groove, Inc.
(Yellow label pressing with ridged rim and 7WH3/7WH4 text. Vinyl has a few crackles at the start, but is fine once it gets going.)

Thought Of Losing Your Love/It's Too Late For Love
Lamp, Early 70s. Very Good-
7-inch...$19.99
An obscure little group soul single – with a fairly heavy post-Temps sound on both sides, and raw production by Herb Miller that reminds us of some of the lesser-known groups on All Platinum. Not exactly sweet falsetto soul – but in that righteous tip that some of the east coast 70s ... 7-inch, Vinyl record

I Am Somebody/The Prophet
Karol, Early 70s. Fair
7-inch...$4.99
Nice group work from Chicago – produced by Clarence Johnson, who handled some of the best of the city's indie scene at the time! "I Am Somebody" is a slow, dark, righteous tune – one that steps along almost with a Norman Whitfield-esque sound, steeped in subtly political ... 7-inch, Vinyl record