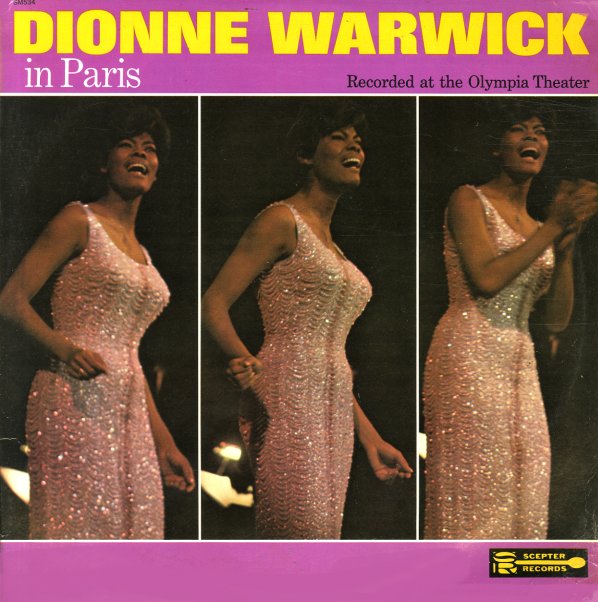 A unique concert album from Dionne Warwick – proof that her talents weren't always restricted to Burt Bacharach arrangements in the studio! The setting is the classy Olympia Theater in Paris, and the style is a bit more open than on Dionne's studio albums – with less material by Bacharach & David than before, and a wider range of tunes that not only includes a few songs sung in French, but also a duet with Parisian popper Sacha Distel! The audience is oddly mic'ed up very high in the mix at times – crashing into the start of most tunes with the ferocity of radio static or a swarm of bees – but Warwick quickly takes over with her own vocals once the songs get going. Titles include "I Love Paris", "C'Est Si Bon", "Walk On By", "You'll Never Get To Heaven", "O Yeah Yeah Yeah", "The Good Life", "La Vie En Rose", and "What'd I Say".  © 1996-2021, Dusty Groove, Inc.
(Mono pressing. Shrinkwrap has some yellowed tape remnants at the sides. Cover has a cutout hole.)

Dionne Warwick On Stage & In The Movies
Scepter, 1967. Very Good+
LP...$4.99
Dionne Warwick's making a bit of a break from formula for this album – by singing a batch of tunes from films and shows, none of which were written by Burt Bacharach & Hal David! Yet despite this change from earlier records, the album's still got a sound that's strongly in keeping with ... LP, Vinyl record album

Soulful
Scepter, 1969. Very Good+
LP...$19.99
Dionne's certainly winning the "soulful" tag on this albums – working with Memphis producer Chips Moman, in a mode that's clearly designed to give her more credibility with the hipper soul scene at the end of the 60s! Burt Bacharach's still in the shadows, but Moman's the real ... LP, Vinyl record album

Dionne Warwick's Golden Hits
Scepter/Coast To Coast, 1960s. Very Good+ Gatefold
LP...$3.99
Lovely early work from Dionne – one of the greatest voices to ever get the support of the great Burt Bacharach, the guiding hand on this tasty batch of early singles! We hardly need tell you about these tracks, because if you know Dionne at all – these are the songs you know! Titles ... LP, Vinyl record album

Dionne Warwick's Greatest Motion Picture Hits
Scepter, Late 60s. Near Mint- Gatefold
LP...$4.99
A late 60s collection of groovy tunes fronted by the always gorgeous voice of Dionne Warwick – some from movies she starred in, some from soundtracks she recorded, and others from films that she never had a hand in at all – other than covering the material and completely making it her ... LP, Vinyl record album