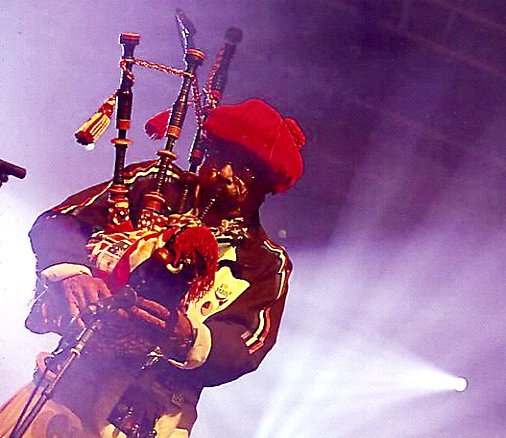 Bagpipes Of The World (3CD set)

A really loving tribute to the late Rufus Harley – and a massive 3CD set of work that's quite different than his older recordings on the market! This set brings together live performances and some radio work done by Harley in the last decade or so of his life – really haunting music that shows an even deeper side of Rufus' jazz talents than we've ever heard on record! CD 1 features a rare performance by Harley in France, with the trio of pianist Georges Arvanitas – recorded in 1995, a decade or so after his studio album with the group – and these tracks are mixed with solo bagpipe numbers by Rufus – which makes for a very compelling mix. The jazz tracks have Harley on both bagpipes and soprano sax – and include "Summertime", "My Shining Hour", "It's Me", "We Me Us", and "Moon River" – mixed with untitled solo tracks, and a radio interview. CD 2 features the last Rufus Harley interview ever – nearly an hour long, and recorded on WHUS in 2006. Remaining tracks on the disc, plus more on the third disc, feature trumpeter America Patton Harley – playing with a cool group that includes Andy LaVerne on piano, Rufus Reid on bass, and John Riley on drums – and another group that features Harold Mabern, Ron Carter, and Adam Nussbaum – on titles that include "A New Love Supreme", "Mr PC", "Naima", "Noah's Ark", and "Soultrane". Then, most of CD 3 features Rufus and Patton, playing together live in Jamaica in 2002 – a pretty unique performance that has Harley Sr on bagpipes and soprano sax, and Harley Jr on trumpet – with some electric backing from a Jamaican combo – on titles that include "Stormy Weather", "The Crack", "Melodies Of The World", "Scotland The Brave", and "Someday My Prince Will Come".  © 1996-2020, Dusty Groove, Inc.