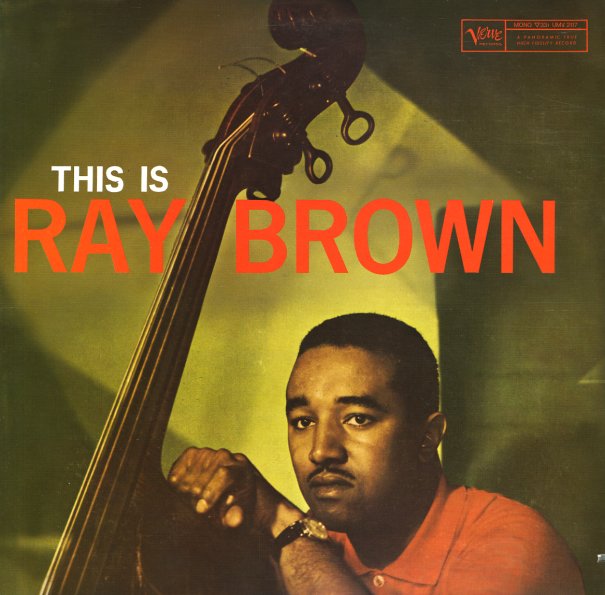 This Is Ray Brown

One of the great Ray Brown LPs for Verve, featuring the legendary bassist in the company of Jerome Richardson, Herb Ellis, Osie Johnson, and Oscar Peterson (who plays organ on some cuts!). Cuts include "Jim", "Cool Walk", "Upstairs Blues", and "Bric a Brac".  © 1996-2022, Dusty Groove, Inc.
(Early 80s Japanese Polydor pressing – UMV 2117. Cover has a cutout notch and light wear.)

Lester Swings
Verve, 1945/1950/1951. Near Mint- 2LP Gatefold
LP...$5.99
Lester Young definitely swings here – on material from a number of different Verve albums of the early 50s – with work from Nat King Cole on piano and Buddy Rich on drums on one session – plus more work from either Hank Jones or John Lewis on piano, and Buddy Rich and Jo Jones on ... LP, Vinyl record album

Award Winner
Verve, 1957. Very Good-
LP...$4.99 (CD...$13.99)
A great little follow-up to the classic West Coast Jazz album recorded by Stan Getz – and like that one, a set to feature some great rhythm accompaniment from the trio of Lou Levy on piano, Stan Levey on drums, and Leroy Vinnegar on bass! The tracks are nice and open – with plenty of ... LP, Vinyl record album

Jazz Perennial – Genius Of Charlie Parker #7
Verve, 1949. Very Good
LP...$9.99
One of our favorite of Verve's "genius of" collections of Charlie Parker's work – largely because it includes some wonderful and oft-overlooked vocal tunes! 4 of the tracks on the set feature Bird blowing with a vocal chorus arranged by Dave Lambert – in a style that shouldn't ... LP, Vinyl record album

Guitar Forms
Verve, 1965. Very Good+ Gatefold
LP...$19.99
Surprisingly wonderful work from Kenny! The album has Kenny's guitar set to arrangements by Gil Evans – who gives the session a modern edge that really sets it apart from other Burrell albums of the time. Kenny's freed to do his thing – wonderfully, we might add – and Gil paints ... LP, Vinyl record album