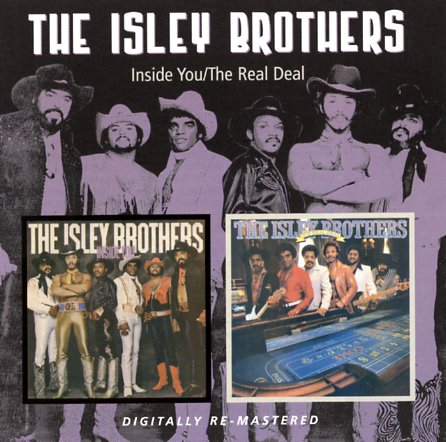 Two early 80s groovers from the Isleys – on one great CD! Inside You is a strong extension of the group's funky 70s style – moving into a more compressed mode that had been taking hold of the group's style over the past few albums, giving them a smoother finish, but one that actually brought out some even more soulful feelings from their overall work. As always, we dig the mellow cuts best – especially the two part "Don't Hold Back Your Love", and the stepper "Welcome Into My Heart". Other tracks include "First Love", "Baby Hold On", and "Love Zone" and "Inside You". The Real Deal is authentic 80s grooving from the Isleys – mostly an album of upbeat, electro-grooving numbers that change up the style a bit more from their 70s funk work. But as usual for this period, they actually sound best on the ballads – clocking in with the sweet slow tune "All In My Lovers Eyes", and sounding even nicer on the anthemic "I'll Do It All For You" – a great little track with a bubbling, steppish groove. Other tracks include "The Real Deal", "Stone Cold Lover", "Are You With Me", and "Under The Influence".  © 1996-2021, Dusty Groove, Inc.