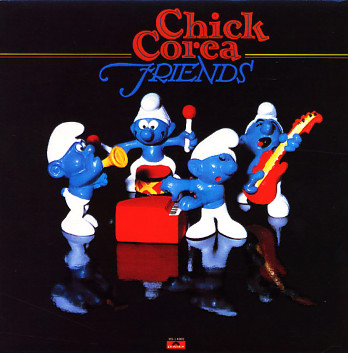 There's Smurfs on the cover of this one, but the album's no cartoony effort – and is instead one of the nicest Chick Corea albums of the 70s! The sound here is nicely restrained from some of Chick's more ambitious records – and is done in a way that almost recalls some of Bob James' best mellow moments on CTI – with Chick playing Fender Rhodes and acoustic piano in the lead, and working with a hip quartet that includes Joe Farrell on saxes and flute, Steve Gadd on percussion, and Eddie Gomez on bass! The round, warm tones of Gomez's bass give the album a wonderfully soulful feel – and Chick himself really response to the great company on the session, by hitting a sound that's arguably even hipper than some of his previous albums. Titles include "Waltse For Dave", "Samba Song", "Sicily", "Cappucino", "Children's Song #15", "The One Step", and "Friends".  © 1996-2022, Dusty Groove, Inc.
(Cover has some ring and edge wear, small corner cut, lightly bent corners, and a small light sticker spot.)