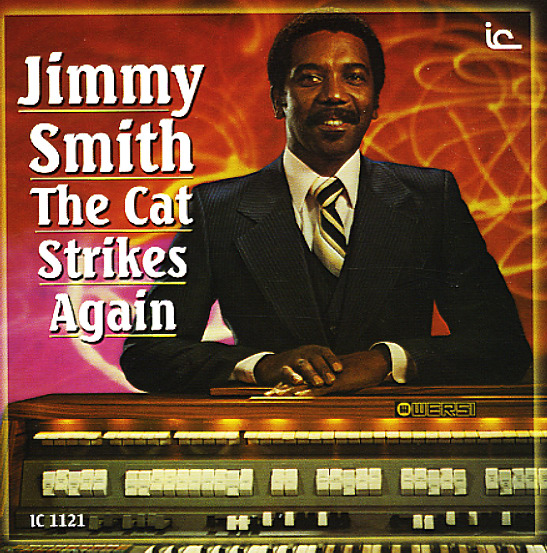 An obscure later album by Jimmy Smith – but one that continues the trend of tighter jazz funk that he began in the 70s! The album's a tight studio session with Jimmy on the "Wersi Saturn W3T" organ, plus guitar by Howard Roberts and Dennis Budimir, piano by Ronnie Foster, trumpet by Oscar Brashear, and percussion by Paulinho Da Costa. The tracks run from straighter soul jazz organ numbers to more pumped-up ones that feel like 70s soundtrack work by Lalo Schifrin – no surprise, since Schifrin contributed 5 tracks to the set. Titles include "Wersi Time", "Free Ride", "The Big Brawl", and "The Cat Strikes Again".  © 1996-2022, Dusty Groove, Inc.

Jimmy Smith Plays The Standards
Blue Note/Sunset, Late 50s. Very Good
LP...$1.99 2.99
Early Jimmy Smith work for Blue Note – packaged together here as a "standards" collection and issued on Liberty's Sunset label in the late 60s! The collection offers little in the way of session details – clearly an attempt to pass it off as new material – but it does ... LP, Vinyl record album

Got My Mojo Workin'
Verve, 1965. Very Good+ Gatefold
LP...$8.99
The title's a bit bluesy, and the record is too – one of the grittier collaborations between Hammond legend Jimmy Smith and ultra-hip arranger Oliver Nelson – who manages to make the whole thing come across with all the right soul styles in the end! There's definitely a nod to the ... LP, Vinyl record album

Midnight Special
Blue Note, 1960. Very Good-
LP...$24.99
A perennial favorite in the Jimmy Smith catalog for Blue Note – and a smoking little set that has Jimmy's Hammond grooving nicely alongside tenor from Stanley Turrentine and guitar from Kenny Burrell! Only Donald Bailey's drums remain from Jimmy's regular trio, but that shift is fine, given ... LP, Vinyl record album

Holy Mama
East Wind/Inner City, 1976. Very Good+
LP...$4.99
A great Junior Mance album from the 70s – one of those dates that was originally only intended for the Japanese market, but eventually got wider release because it sounded so great! Junior's a bit different here than on his Atlantic or Polydor work from a few years before – warm and ... LP, Vinyl record album

Doodlin'
Inner City, 1976. Near Mint-
LP...$24.99
A very different album from Archie Shepp – and an introspective record that shows a whole new side of his talents! For the session, Shepp plays piano, not tenor – an instrument he handles with an angular, modern tone – one that seems to echo bits of Herbie Nichols and Thelonious ... LP, Vinyl record album