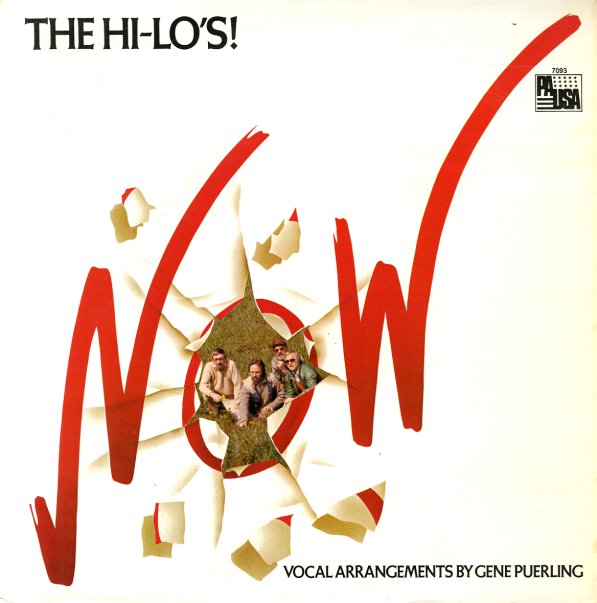 By the time of this early 80s recording, original Hi-Lo's member Gene Puerling had been crafting sly vocal jazz gems for MPS with the Singers Unlimited – mixing together smooth 70s production and slight electric instrumental touches, to get a sublime sound that took the harmony approach of the 50s male quartets to whole new limits! On this set, he's back with his original group, giving them the same treatment – adding in some wonderful west coast backings directed by Clare Fischer, and featuring Fischer on electric piano, Tommy Tedesco on guitar, and Gary Foster on flute. Titles include "Mr Blue", "Quiet Nights", "While We're Young", "Ain't Doin Bad Doin Nothin", and "The Night We Called It A Day".  © 1996-2022, Dusty Groove, Inc.
(Pausa pressing. Cover has staining on the edges, light wear, and a split corner.)

Hi Lo's, I Presume
Starlite, 1955. Very Good+
LP...$1.99
An early, early Hi-Lo's album on Starlite Records – and a harmony vocal masterpieces of the 50s! Vocal groups had certainly existed in American pop music before the quartet first hit the scene, but thanks to incredible vocal arrangements by leader Gene Puerling, and dynamic orchestrations by ... LP, Vinyl record album

Hi Lo's & All That Jazz
Columbia, Late 50s. Near Mint-
LP...$2.99
One of the swinginest albums by the Hi Lo's, thanks to some great backing from Marty Paich and his Dek-Tette – the same group used to back Mel Torme and other west coast singers on other great vocal sessions of the time! Marty brings a bit more groove to the set than usual – pushing ... LP, Vinyl record album

Sentimental Journey
MPS, 1974. Near Mint-
LP...$3.99
A surprisingly wonderful album by the Singers Unlimited – and one of their best for MPS! The album features mostly older evergreens, arranged in a lush style by Robert Farnon – and both of those elements would normally be enough to turn us off – but somehow Gene Puerling and crew ... LP, Vinyl record album

November Girl (Jazzman pressing)
Jazzman, 1970. Near Mint-
LP...$6.99
A rare gem from the Clarke Boland Big Band – and one of the group's few vocal sessions ever! The album's a really unique one – recorded in the UK in 1970, and featuring singer Carmen McCrae joining the group for a fresh and unusual batch of tracks – most of them originals written ... LP, Vinyl record album