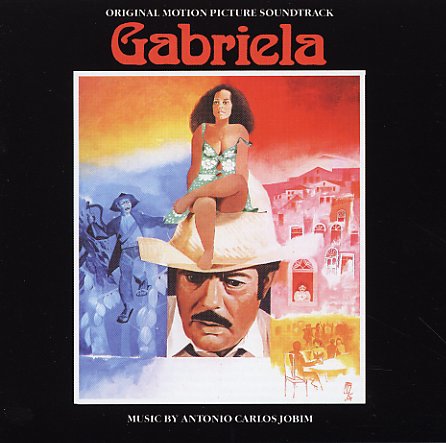 A pretty nice little record from Jobim – one that builds on the larger orchestrations he was crafting during the 70s, working into a sound that's rich, warm, and a strong accompaniment for this film that starred Marcello Mastroianni. Oscar Castro Neves conducts the orchestra, and Jobim and Gal Costa sing on a few songs – dueting in an especially lovely way on the tracks "Tying The Knot", "Love Theme From Gabriela", and "Love Theme – Long Version". Other titles include "Arrival Of The Wanderers", "Thinking Of Life", "Playing Leapfrog", and "Walking Through The Forest".  © 1996-2022, Dusty Groove, Inc.
(Original Brazilian pressing. Cover has light wear and bent corners.)

Wonderful World Of Antonio Carlos Jobim
Warner, 1965. Very Good+
LP...$19.99
The wonderful world of Antonio Carlos Jobim gets a whole lot bigger on this American release from the 60s – thanks to a collaboration with the great Nelson Riddle, the arranger whose work made so many of Frank Sinatra's albums so great! Riddle really understands the jazzy elements at the ... LP, Vinyl record album

New Face Of Luiz Bonfa
RCA, 1970. Near Mint-
LP...$11.99
A wickedly wonderful record from Luiz Bonfa – one that has his bossa-inflected guitar style supported by larger arrangements by Marty Manning. The feel is kind of bossa meets 60s easy meets early CTI – as Manning's work reminds us a lot of the larger orchestrations penned by Don ... LP, Vinyl record album

Bem Transado
RCA (Brazil), 1983. Near Mint-
LP...$13.99
Smooth samba work from Joao Nogueira – recorded in 1983 with arrangements that have a bit of keyboards in with the guitars and percussion. Titles include "Outros Tempos", "Se Segura Seguaranca", "Como Sera", "Dois Dois", "Clube Do Samba", and ... LP, Vinyl record album

Sivuca & Rosinha De Valenca – Gravado Ao Vivo
RCA (Brazil), 1977. Very Good
LP...$19.99
A great live set from Sivuca – the Brazilian singer and accordionist who's crafted some incredibly groovy recordings over the years! Sivuca's working here with Rosinha De Valenca – the famous female guitarist who was one of Brazil's greatest players on the instrument – and her ... LP, Vinyl record album

Cavaquinho Camarada
RCA (Brazil), 1977. Near Mint-
LP...$13.99
Lots of great work on cavaquinho from Waldir Silva – as you might guess from the title – and a set that also features his famous theme for Pecado Capital! LP, Vinyl record album