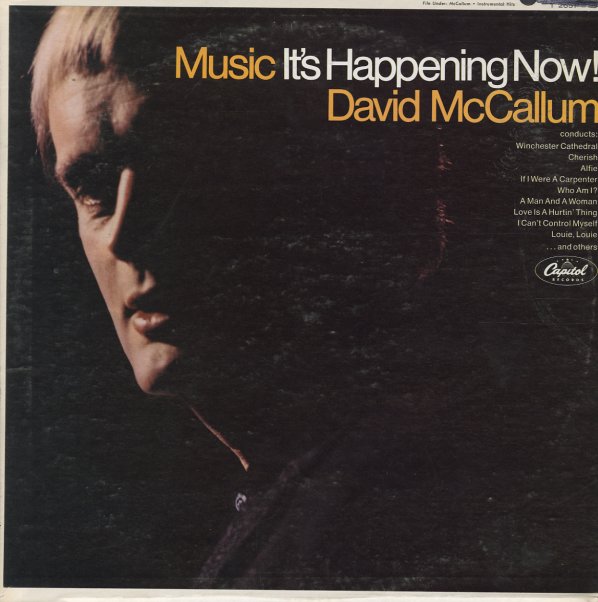 McCallum's third album for Capitol – and like the first, a genius batch of instrumental tunes that's graced with the talents of HB Barnum and David Axelrod! As beathead revivalists have shown, the album would be nothing without that pair, especially Axelrod – and McCallum's really just the figurehead to sell a cool batch of 60s instrumental easy tunes with some odd experimental moments. These include Barnum's eerie "House Of Mirrors" tune and Axelrod's more sedate groovy number "On A Weekend". Other trakcs include "Cherish", "A Man & A Woman", "Love Is A Hurtin Thing", and "I Can't Control Myself".  © 1996-2021, Dusty Groove, Inc.
(Mono rainbow label pressing. Cover has a cutout hole, in great shape otherwise!)

Music – A Part Of Me
Capitol, 1966. Sealed
LP...$19.99
The first album that Man From UNCLE David McCallum cut for Capitol – a batch of instrumental tunes that was really masterminded by arranger HB Barnum and producer David Axelrod! The record features short groovy versions of mid 60s pop tunes, plus a few instrumentals by McCallum, Barnum, and ... LP, Vinyl record album

Music from A Surplus Store
Capitol, Late 50s. Very Good
LP...$16.99
A masterpiece mixture of sound effects and loungey orchestration! Wild stuff featuring "found objects" from a surplus store – like saws, whistles, sirens, and other junk – plus the great arrangements of one of Capitol's best bandleaders. (In case you're not familiar with ... LP, Vinyl record album