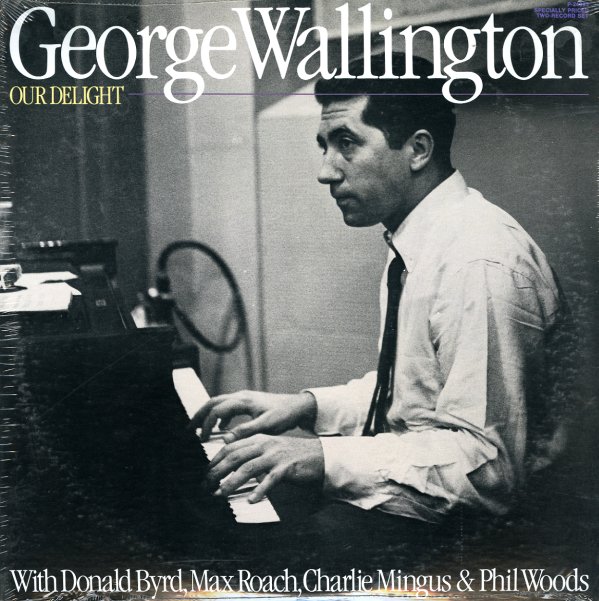 Truthfully we don't know what happened to George Wallington, but he was one of the bright lights on the early bebop scene. He didn't leave behind a whole lot of recordings, but this 2 LP set brings together selections from three hard to find Wallington sides from the 50s – George Wallington Trio, George Wallington Trio Volume 2 and Jazz For The Carriage Trade. There's a fair bit of trio material as you might have already gathered, with greats like Teddy Kotick, Oscar Pettiford, Max Roach and Curley Russell providing the rhythm, and a few numbers that also feature the horns of Donald Byrd and Phil Woods. Includes "Tenderly", "Arrivederci", "Squeezer's Breezer", "Together We Wail" and the title track.  © 1996-2021, Dusty Groove, Inc.
(Cover has minimal wear.)

George Wallington With Strings
Norgran, Early 50s. Very Good-
LP...$39.99
One of the rarest albums ever from George Wallington – and that's saying a lot, given the obscurity of some of his sessions! This unusual set has George mostly working in a drum-less group with cool use of strings – just a bit of violin, viola, and cello – but in ways that color ... LP, Vinyl record album

Soul Shack
Prestige, 1963. Very Good-
LP...$14.99
A mellow burner – and a real classic from the early 60s soul jazz years of Prestige Records! The album brings together the saxes of Sonny Stitt (both alto and tenor) and the Hammond of Jack McDuff – who's really coming into his own at this point, and has a lean, mean tone that's a ... LP, Vinyl record album

Sparks!
Prestige, 1970. Very Good-
LP...$14.99
A killer – one of the best from Prestige during the runaway classic years of the early 70s! Melvin Sparks is a genius guitarist, with a talent as rich as that of Grant Green, who's probably his most immediate precursor. He'd played in the groups of Lou Donaldson and Jack McDuff during the ... LP, Vinyl record album

Arrangers' Touch
Prestige, Mid 50s. Very Good+ 2LP Gatefold
LP...$9.99
Mid 70's 2LP set that combines fantastic early work from Gil Evans and Tadd Dameron. The Gil Evans tracks are shorter and less ambitious than some of Evans' work on Impulse, but the group is excellent – and even in a shorter format, the conception of the work still contains plenty of rich ... LP, Vinyl record album