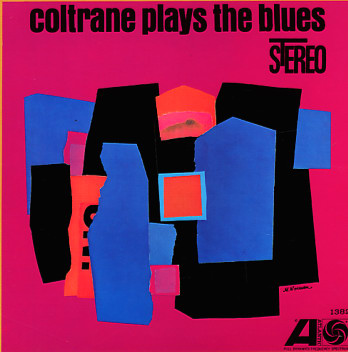 Coltrane plays the blues, but in a way like nobody else – stepping off of the deeply soulful sound of his late Prestige years, and moving into even more open and exploratory space for Atlantic! The setting is bare bones and simple – and many of these numbers begin with the sort of simple vamp that might characterize a blowing session for other labels, but which still has a strong degree of focus for this date. Rhythm is from McCoy Tyner on piano, Steve Davis on bass, and Elvin Jones on drums – and there's some great sharp edges from Coltrane here, especially on the numbers that feature tenor sax in the lead. Side one of the album features more standard bluesy vamps, but side two really opens up into some tremendous numbers that show the first great hint of modal energy – rollingly enchanting titles that still leave us breathless after all these years! Tracks include "Blues To Elvin", "Blues To Bechet", "Mr Syms", "Mr Day", and "Mr Knight".  © 1996-2021, Dusty Groove, Inc.
(180 gram pressing, from 2010.)

Tanganyika Strut (French pressing)
Musidisc (France), 1958. Near Mint-
LP...$29.99
A 70s collection of some of Coltrane's groundbreaking recordings for Savoy from the late 50s – recorded in the company of a super-hip sextet with Wilbur Harden on trumpet, and done in a way so that the tracks open up nice and long, in strong modal grooves that point the way towards Trane's ... LP, Vinyl record album

Best Of John Coltrane – His Greatest Years Vol 2
Impulse, 1960s. Near Mint- 2LP Gatefold
LP...$19.99
One of a nuber of repackagings and collections of Coltrane's work for Impulse. Loads of great players are involved on some of the better recordings of his later career, for Impulse, including McCoy Tyner, Jimmy Garrison, Elvin Jones, Pharoah Sanders, Freddie Hubbard, Eric Dolphy, Archie Shepp and ... LP, Vinyl record album

His Greatest Years Vol 3
Impulse, 1960s. Very Good- 2LP Gatefold
LP...$11.99
A 2 LP retrospective of some of the more spiritual exploratory sides 'Trane was cutting in the mid to late '60's for Impulse. A number of cuts feature the classic quartet with Jimmy Garrison, McCoy Tyner & Elvin Jones, but a few feature some of the later lineups with Pharoah Sanders, Reggie ... LP, Vinyl record album

To The Beat Of A Different Drum – The Mastery Of John Coltrane Vol 2
Impulse, 1965. Near Mint- 2LP Gatefold
LP...$29.99
An excellent set that features rare work from a mid 60s quartet that did not feature the drumming of Elvin Jones – including a number of tracks that had not yet been issued before the time of the LP. All titles are played by a quartet that include Coltrane, McCoy Tyner, Jimmy Garrison, and ... LP, Vinyl record album

Best Of John Coltrane – His Greatest Years
Impulse, 1960s. Very Good+ 2LP Gatefold
LP...$19.99
Truly the best of the best of Coltrane's years at Impulse – as the collection has a strong focus on the longer, more spiritual numbers that he was free to develop while working for the forward-thinking company. The set's stuffed with great numbers – and includes classics like "Afri ... LP, Vinyl record album

Alternate Takes
Atlantic, Late 50s/1974. Very Good
LP...$13.99
70's issue of alternate takes from some of Trane's best Atlantic sessions, including the one that went on to be the Giant Steps album. The alternates feature different versions of some of Coltrane's most familiar numbers for Atlantic, including "Naima", "Cousin Mary", "Gian ... LP, Vinyl record album