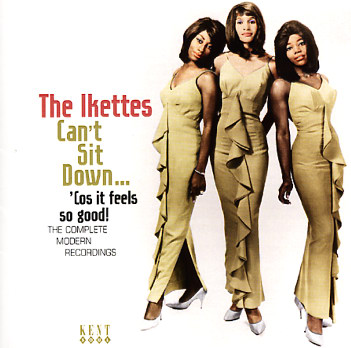 Forget Tina Turner – we'll take Ike's backup singers, who sound great all the way through this collection! The Ikettes may never have had the fame of Tina, but back in the early and mid 60s, they were actually scoring a few more hits – and these recordings for the Modern label represent the group at their height – stepping firmly into righteous soul territory, shaking off any girl group cliches, and avoiding any of the stereotypes that could sometimes mar Ike Turner's projects. There's a really special sound here – one that's got bits of Motown, bits of R&B, and bits of Northern Soul – all wrapped together perfectly and delivered with sock-solid vocals from singers Robbie Montgomery, Jessie Smith, and Venetta Fields. The CD features all the material from the girls' full album for Modern – Soul The Hits – plus loads of other singles and even some unissued tracks! Titles include "Fine Fine Fine", "Camel Walk", "Sally Go Round The Roses", "Cheater", "You're Trying To Make Me Lose My Mind", "I'm So Thankful", "Don't Feel Sorry For Me", "Can't Sit Down Cos I Feel So Good", "Lonely For You", "Sha La La", "It's Been So Long", and "Nobody Loves Me".  © 1996-2023, Dusty Groove, Inc.