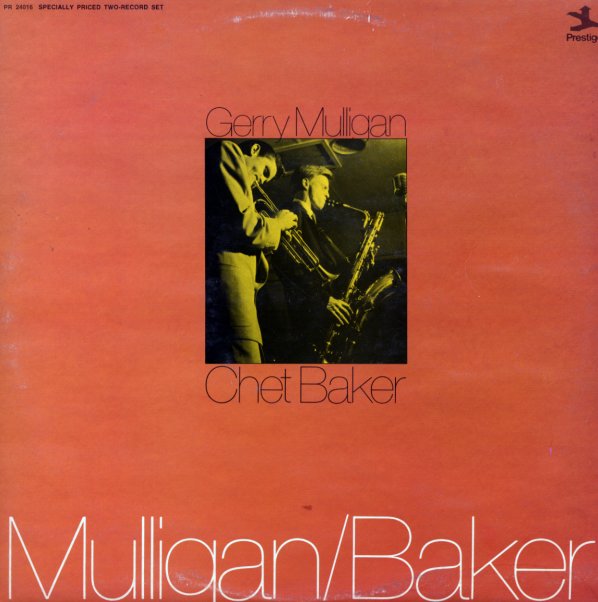 2LP set released in the 70's featuring work from both of these West Coast giants. The first half focuses on recordings of Gerry Mulligan working with a strong early group – Chet Baker on trumpet, Chico Hamilton on drums, and Carson Smith on bass – on 4 tracks recorded in San Francisco, and 4 others recorded slightly later in LA. The tunes are short, piano-less, and have that fluid 50s Mulligan groove – and titles include "Turnstile", "Limelight", "Carioca", "Bark For Barksdale", and "Line For Lyons". Also included are recordings that feature Gerry's own group – an ensemble that features Nick Travis on trumpet, Allen Eager on tenor, and George Wallington on piano – on all original Mulligan titles that include "Ide's Side", "Bweebida Bobbida", "Kaper", "Funhouse", and "Mulligan's Too". The second half of this set contains material recorded for Prestige by Chet Baker in 1964. Baker plays fluegelhorn, and he's backed by a fairly soulful combo that includes George Coleman on tenor, Kirk Lightsey on piano, Herman Wright on bass, and Roy Brooks on drums. The set grooves in a way that few other Chet Baker albums do, which is something you might expect from a record that has tracks with titles like "Go Go", "Bevan Beeps", and "Rearin' Back".  © 1996-2022, Dusty Groove, Inc.

Soul Battle
Prestige, 1960. Near Mint-
LP...$24.99
This is the kind of battle we like to see! Three heavy tenors – Nelson, King, and Jimmy Forrest – come head to head in a relaxed set of tunes cut in that Prestige blowing session mode, but tweaked with a bit more tightness, in the style of some of the label's emerging soul jazz sides ... LP, Vinyl record album