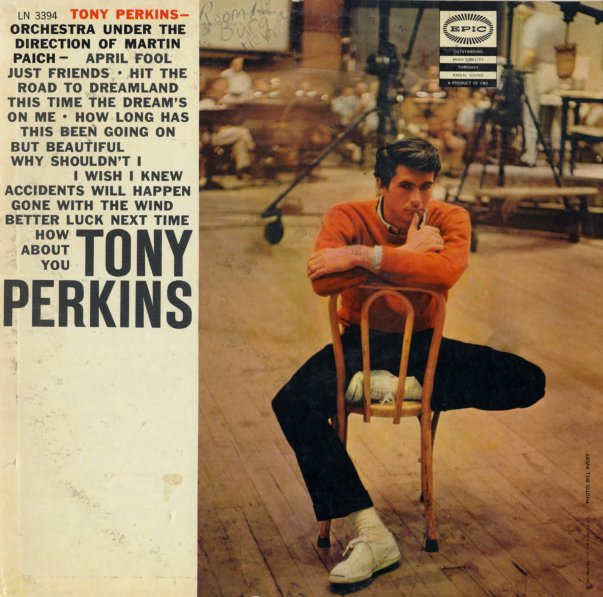 A really wonderful first album from Anthony Perkins – cut years before he shocked the screen in Psycho, at a time when he was arguably more committed to his role as a singer! Perkins is surprisingly great throughout – with a mellow, masculine approach that's a bit like Matt Dennis at the time – never overdone, but with just the right sort of inflections to really personalize the music. Tony never tries to belt it out of the park, and that's what we really like about the record – in that he's a much more honest, understated singer – a nice contrast to some of the more emotive talents on the charts at the time. Marty Paich provides the backing – in a great jazzy style that's similar to his work with Mel Torme – and titles include "April Fool", "Hit The Road To Dreamland", "How Long Has This Been Going On", "But Beautiful", "I Wish I Knew", "Accidents Will Happen", and "Better Luck Next Time".  © 1996-2021, Dusty Groove, Inc.
(Cover has soome aging and a peeled spot in the top right.)

Joan Shaw Sings For Swingers
Epic, Early 60s. Very Good
LP...$9.99
One of the few albums ever recorded by Joan Shaw – a pretty hip singer from the 60s, working here in a nice small group setting. Joan's vocals are a bit rough, which is possibly why she never made it big, but she does have a way of putting over a tune that grabs us nicely – kind of ... LP, Vinyl record album

Miss Ann Burton
Epic (Japan), Late 60s. Near Mint- Gatefold
LP...$19.99
A collection of late 60s material from Dutch singer Ann Burton – recorded with sublime accompaniment from the trio of pianist Louis Van Dyke, a fragile and spare talent on the keys – and a perfect match for Burton on the mood of the album! Ann's vocals really come across with the ... LP, Vinyl record album