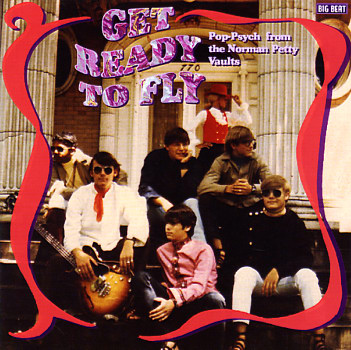 Get Ready To Fly – Pop-Psych From The Norman Petty Vaults

Fuzzy psychedelic pop tunes from the late 60s – engineered by Norman Petty at his New Mexico studios towards the end of the decade – a startling change of pace from his famous work with Buddy Holly a decade earlier! Hardly any rockabilly or hillbilly rock to be found here – Get Ready To Fly is made up of tracks that link the kaleidoscopic sounds of the nascent psych genre, the hard driving buzz of garage rock, and the catchy hooks of the more chart ready rock of the time! Alas, there are no hits here, but it's full of gritty gems. We can think of some fairly high profile modern scenesters in Chicago alone that don't have even a thimbleful of the charm to be found on this compilation. 26 tracks in all: "Groovy Motions" by Fireballs, "No Silver Bird" by the Hooterville Trolley, "Ain't That Love" by the Cords, "Door Knob" by Intricate Blend, "I Know" by the Dard, "Mattie Jo's" by Mike Burnett, "Not Fade Away" by Group Axis (that Bo Diddley-bitten beat sounds great in any context), "Think About It" by the Frantics, "Mystic Magic Movements" by the Shi Guys, "Acid" by Stu Mitchell with the Wes Dakus Rebels, and more.  © 1996-2022, Dusty Groove, Inc.