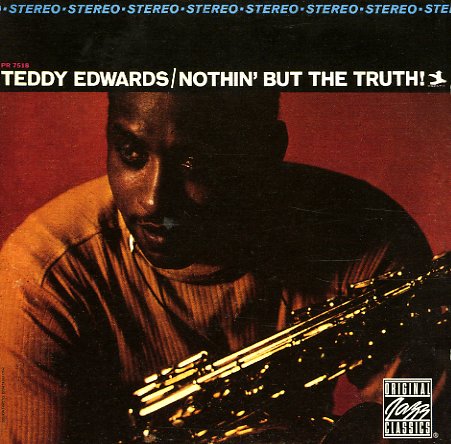 Nothin But The Truth!

Great stuff – and one of the groovier Teddy Edwards sessions from the 60s! The group's a sextet – with Walter Davis piano, Paul Chambers bass, Billy Higgins drums, Phil Orlando guitar, and Montego Joe on congas and bongos. The band grooves in a soul jazz vamping mode – darkly tinged, with a bit of that Blue Note style of expression – and over the top. Edwards plays some wonderful solos, raspy in tone, with a nice edge to his tenor, slurred out in some gutbuckety playing that's very much in the pocket! Titles include "Brazilian Skies", "Lovin It, Lovin It", "Nothin But The Truth", and "On The Street Where You Live".  © 1996-2021, Dusty Groove, Inc.
(Blue label pressing. NOTE: vinyl is great overall, but has a few tiny, secondary moments of groove damage – which make an odd short squeak a few times. The rest is great – and cover is great.)