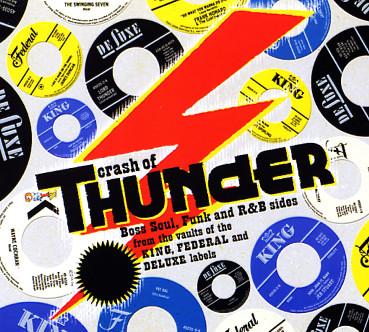 Crash Of Thunder – Boss Soul, Funk And R&B Sides From The Vaults Of The King, Federal & Deluxe Labels

A mighty dip into the legendary vaults of King Records – and one that manages to come up with a motherlode of funky grooves, even though none of them feature James Brown! The package is an essential look at the hinterland of King – artists who mostly just cut singles for the label in the 60s and early 70s, but who managed to match the groove of some of the bigger talents who charted more successfully for the company. There's plenty of gritty, funky cuts on the set – some done as soul numbers with a funky undercurrent on the bottom – others done as heavy funk cuts with a few nice soul touches on the vocals! The set was hand-picked by Mr Finewine – well known for his genius on the Vital Organs collection – and tracks include "Peter Rabbit" and "Which Way" by The Presidents, "Soul Jerk It Baby" by Jeb Stuart, "How Do You Feel" by Peggy & Artie, "Book Of Love" by Clarence Murray, "I Got It Made" by James Duncan, "Football" by The Swinging Seven, "Jo Ann" by Robert Moore, "You've Got To Be Strong" by James Duncan, "Fat Gal" by Mickey Murray, "Your Key Don't Fit Anymore" by Marie Queenie Lyons, "Let Me Be A Steppin Soul" by Charles Spurling, "Thunder" by Lord Thunder, and "Chopper 70" by Wayne Cochran.  © 1996-2021, Dusty Groove, Inc.

Tidbeats – Lots Of Forgotten Surplus Audio Tracks From The Vaults Of Cinevox Records
Cinevox (Italy), 1960s/1970s. New Copy 2CD
CD...$24.99 33.99
An amazing treasure for fans of Italian soundtrack music – the fresh discovery of rare material from the vaults of Cinevox Records – one of the most important Italian soundtrack labels of the 60s and 70s! All of the music here is previously unreleased – and runs from full songs ... CD