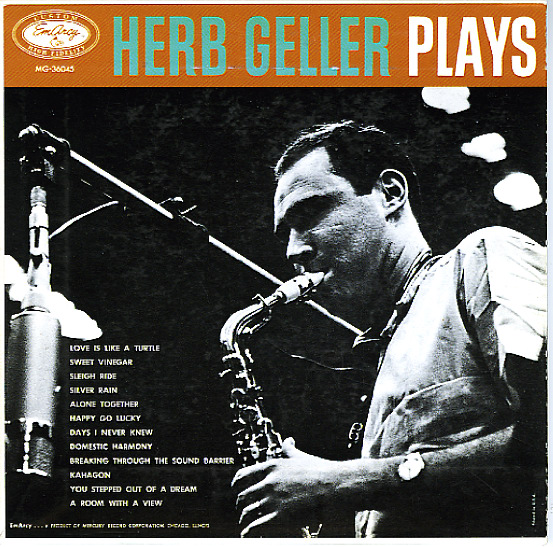 A seminal piece of west coast bop from the mid 50s – featuring altoist Geller in group with wife Lorraine on piano, and either Curtis Counce or Leroy Vinnegar on bass, and either Larry Marable or Eldridge Freeman on drums. The groove's nice and hard, nice and stripped-down – and Geller proves himself to be a fantastic player with a soulful edge that sets him apart from most of his LA contemporaries. Titles include "Sweet Vinegar", "Love Is Like a Turtle", "Kahagon", "Breaking Through The Sound Barrier", and "Days I Never Knew".  © 1996-2021, Dusty Groove, Inc.
(Japanese mono Phonogram pressing, EXPR-1025, with obi. Cover has a small cutout notch and light surface wear.)

Cool Bruel
EmArcy, Mid 50s. Very Good
LP...$39.99
One of Emarcy's excellent American releases of work by Swedish modernists of the 50s – in this case the quartet of Max Bruel, featuring Bruel on baritone, Bent Axen on piano, Jorgen Ryg on trumpet, Leif Sjoberg on bass, and William Schiopffe on drums. Bruel's got a tone that recalls a lot of ... LP, Vinyl record album

FYI (10-inch)
EmArcy, Early 50s. Very Good-
LP...$14.99
Proof that Charlie Ventura was one of the hippest talents on the tenor of his generation – a sharp-edged batch of tunes that hang perfectly between bop and swing, played with some very cool touches! The lineup features Bill Harris on trombone, Charlie Shavers on trumpet, and Ralph Burns on ... LP, Vinyl record album

Offramp
ECM, 1982. Very Good+
LP...$9.99
A really wonderful little record from Pat Metheny – quite possibly our favorite by the man, thanks to some really inventive sounds that still resonate strongly in the groove scene today! Pat's skirting nicely here between the sound-based quality of earlier records, and some of the more fluid ... LP, Vinyl record album

Moose The Mooche (aka Blowing Away)
Discovery, 1978. Near Mint-
LP...$11.99
An obscure late 70s session that pairs globe-trotting trumpeters Dizzy Reece and Ted Curson – two of our favorite underground talents from the 50s and 60s! The sessions is quite laidback – with a rhythm section that includes Roy Haynes on drums, Sam Jones on bass, and Claude Williamson ... LP, Vinyl record album