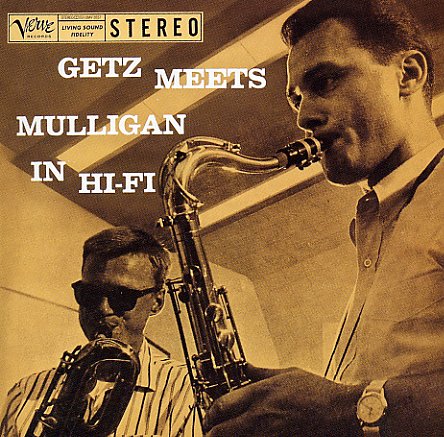 Also available
Stan Getz & Gerry Mulligan — Getz Meets Mulligan In Hi Fi ... CD 13.99
Stan Getz & Gerry Mulligan — Getz Meets Mulligan In Hi Fi ... CD 5.99
The tenor of Stan Getz meets the baritone sax of Gerry Mulligan – and then they switch things around for half of the record, as Stan picks up the baritone and Mulligan takes on tenor! Gerry always seems to open up whole new sides of his playing when sharing the leader spotlight with another star – and here, in the company of Getz, he hits a shimmering, sparkling sound that's really great, and filled with feeling. Stan's wonderful too – very much in his best mid 50s Verve period – working in a groove that's deep and laidback, with a strong undercurrent of warmth – thanks to familiar rhythm backing from the trio of Lou Levy on piano, Ray Brown on bass, and Stan Levey on drums. Titles include "Anything Goes", "Ballad", and "That Old Feeling".  © 1996-2022, Dusty Groove, Inc.
(Early 80s Japanese pressing – UMV 2657. Includes obi and insert.)