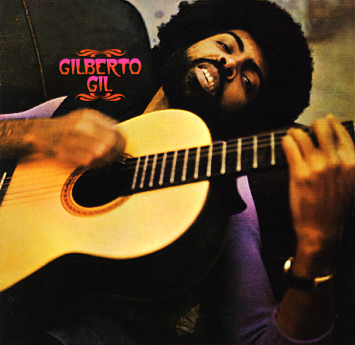 A rare British recording from Gilberto Gil – sung completely in English, and recorded while living in London, in political exile along with Caetano Veloso! The album's somewhat similar to Veloso's famous London album from 1971 – certainly in structure, as the backings are relatively stripped-down, and mostly feature acoustic guitar, bass, and percussion, alongside Gil's English lyrics. But the record's somewhat different too – in that it's got a brighter, more redemptive feel – almost an indication that Gilberto's time abroad hadn't been such a terrible thing – especially given that the record is a new creative departure in his music! The English lyrics are really a treat – and are sometimes sung as a broken strand of familiar words, trying to work themselves together into a fragile tapestry of emotion – sometimes succeeding, sometimes not – but always beautiful, and always filled with the emotion of his experiences in exile! Titles include "Volkswagen Blues", "The Three Mushrooms", "Babylon", "Nega (Photograph Blues)", and "Mamma" – plus 3 bonus cuts: "Can't Find My Way Home", "Up From The Skies", and a great version of "Sgt. Pepper's Lonely Hearts Club Band". US version also features great sound and new liner notes by Peter Margasak!  © 1996-2021, Dusty Groove, Inc.

Quarteto Em Cy Interpreta – Gonzaguinha, Caetano, Ivan, Milton
Philips/Universal (Japan), 1980. New Copy
CD...$13.99
A really wonderful album from Quarteto Em Cy – the Brazilian vocal quartet who first rose to prominence during the bossa nova years, but soon moved into even more sophisticated material during the 70s! The approach of this set is telegraphed in the title – as the group take on songs ... CD