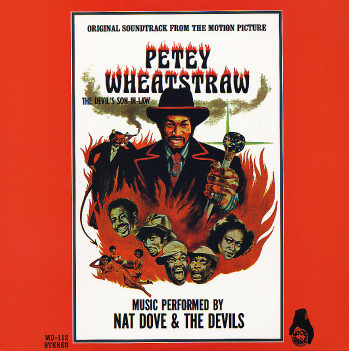 One of the funkiest blacksploitation soundtracks of the 70s – a rare indie gem from Nat Dove & The Devils! Dove's got a style that's a lot rougher and rootsier than other soundtrack artists of the 70s – an approach that's more based in the modes of the indie funk underground of the time, and less in the more polished studio funk you'd find on bigger film releases. The grit in the grooves is wonderfully welcome here – and it's a quality that really sets this one apart from the pack, and keeps it in heavy rotation over the years! Most of the tracks on here are instrumentals, and a few of the cuts have vocals by Mary Love – and titles include "Joy", "Petey Wheatstraw", "Steve's Den", Junkie Chase", "Zombie March", "Ghetto Street USA", and "Loving You".  © 1996-2023, Dusty Groove, Inc.

Big Maybelle Got A Brand New Bag (LP sleeve edition)
Rojac/Traffic, 1967. New Copy
CD...$3.99 16.98
Big Maybelle's got a new bag – and we like it! This tasty set was cut for the tiny Rojac label in between Maybelle's earlier years at Savoy and later albums on Brunswick – and it's got a swinging, 60s mod sort of style that's pretty darn groovy, baby! The arrangements are by Bob Gallo ... CD

Nobody But You Babe (LP sleeve edition)
Tay-Ster/Traffic, 1969. New Copy
CD...$3.99 16.98
Don't get this set mixed up with Clarence Reid's album of a similar name on Alston/Atco – as this rare date for the Tayster label is quite different – although it still shares the famous title track! Reid's in perfect rough-edged form here – almost more strongly southern soul ... CD

Dolemite
Generation International/Traffic, 1975. New Copy
CD...$3.99 16.98
Quite possibly THE mother of all funky soundtracks – the legendary score to Rudy Ray Moore's classic first Dolemite film! The record's been referenced for years, and all the hype is totally right – because the whole thing's overflowing with funky tracks both vocal and instrumental ... CD