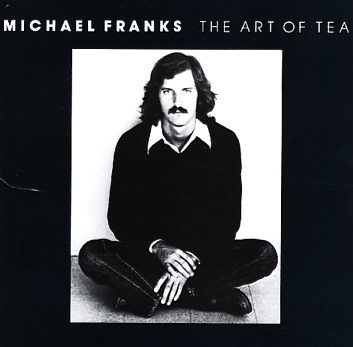 A seminal classic from Michael Franks – one of those records that's almost a whole genre unto itself, and which set a whole new tone for the male voice in American music! The style here is light and jazzy – almost an evolution of modes first begun by Kenny Rankin, and served up here with a similarly compressed production style that really brings out the jazz in the instrumentation. Players include Michael Brecker, Joe Sample, Larry Carlton, and David Sanborn – all sounding great with a bit of added strings from Nick DeCaro. But the real star of the set is clearly Franks – whose light vocals and creative lyrics sound wonderful next to the electric piano on the set. Titles include "Eggplant", "Monkey See Monkey Do", "Jive", "Mr Blue", "Popsicle Toes", "St Elmos Fire", "I Don't Know Why I'm So Happy I'm Sad", and "Sometimes I Just Forget To Smile".  © 1996-2022, Dusty Groove, Inc.
(Cover has some ring and edge wear, small sticker spots, and a name in pen on front and back. Labels have a name in pen.)

One Bad Habit
Warner, 1980. Very Good+
LP...$9.99
Warm vocals, jazzy keyboards, and a wonderfully laidback set from Michael Franks – a perfect illustration of the kind of music he could make better than anyone else! Although recorded at the end of the 70s, the set's got a simplicity that few other records of the time could match – a ... LP, Vinyl record album

Burchfield Nines
Warner, 1978. Near Mint-
LP...$14.99
Great songs, great vocals, great instrumentation, and another late 70s classic from Michael Franks – one of the few mainstream masters of understatement in his generation! As on all his best albums, the style here is a subtle blend of jazz and pop with a bit of a Brazilian inspiration – ... LP, Vinyl record album

Sleeping Gypsy
Warner, 1977. Near Mint-
LP...$9.99
A really brilliant little record – one of those gems that you've probably passed by so many times because it's ubiquitous, but which never fails to please over the years! Forget any pre-conceived notions you might have about Michael Franks, because at this early point in his career the man ... LP, Vinyl record album

Sinatra Basie – An Historic Musical First
Reprise, 1962. Near Mint- Gatefold
LP...$9.99 (CD...$1.99)
Sinatra-Basie is the inaugural effort from the 2 leaders and the stellar orchestra – and it's a great one. Sinatra is as charismatic and loose out front as he's ever been on record, and the Basie & his players swing brilliantly with arrangements by Neal Hefti. Titles include "Pennie ... LP, Vinyl record album