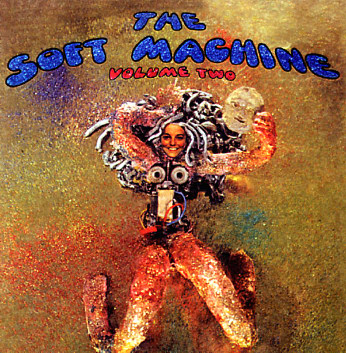 Sublime early work from Robert Wyatt and crew – a psychedelic accented jazz rock classic that never gets old – and a visionary set that inspired a generation! The heavily fuzzy guitar sound is transcendent on Volume Two – with sudden jazzy changes, augmented by horns, and all done with a sly sense of humour for which the group doesn't get enough credit. The set's broken up into two different "concept" halves – and side one is "Rivmic Melodies" – and includes "Pataphysical Introduction", "A Concise British Alphabet", "Dada Was Here", and "Out Of Tunes". Side two is "Esther's Nose Job" – with the parts "Pig", "Fire Engine Passing With Bells Clanging", "Orange Skin Food", and "A Door Opens & Closes". Wyatt's on vocals and drums; Hugh Hopper is on bass, guitar, and alto; and Mike Ratledge plays some great Lowry and Hammond organ, plus a bit of harpsichord and flute!  © 1996-2022, Dusty Groove, Inc.
(US black label stereo pressing. Cover has a small sticker spot, minimal surface wear, a 2 inch center split in the bottom seam, and is lightly bent near the top.)

Emerge
Probe/ABC, 1969. Very Good+ Gatefold
LP...$49.99
Heavy fuzzed out psychedelia from the late 60s Twin Cities scene – the wild and hard charging Emerge from The Litter – with a heft that would be just as right at home in Detroit at the time as it was in Minneapolis! A lot of that has to due to with the heft – the drums pound ... LP, Vinyl record album