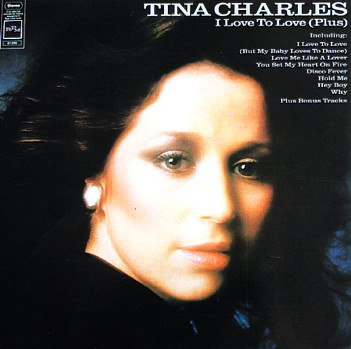 I Love To Love (plus bonus tracks)

A great expanded version of this classic from Tina Charles – one that brings in 8 more bonus tracks from her pre-disco years! These tunes are really wonderful – titles that show a style of female pop that still has the soul-influenced quality that was picked up by the British scene in the late 60s, but which pushes that groove with a bit more polish – serving up class and confidence in a single breath, but still having enough of a soul quality to appeal to our ears. Added to these bonus tracks is the main album – I Love To Love – a record that mixes older vocal touches with the swirling sounds of the legendary Biddu – in a groove that's got a heck of a lot to offer! Tina never was one of the most underground singers of her generation – but it's her confidence in that fact that makes this music so great – an unabashed love of the poppier sounds of the dancefloor, in a way that beautifully mixes together 70s AM sensibilities with the growing sounds of the disco movement. Biddu's a great choice for the project – and while the music isn't as exotic as some of his own albums, it's still got some great instrumental flair! Titles include "Love Me Like A Lover", "I Love To Love", "Hold Me", "Hey Boy", "Why", and "Disco Fever". Bonus tracks are from 1969 to 1973 – and include "Rich Girl", "In The Middle Of The Day", "Good To Be Alive", "Same Old Story", "Band Of Gold", and "You Can Do Magic".  © 1996-2021, Dusty Groove, Inc.

Free Life
CBS/PTG (Netherlands), 1978. New Copy
CD...$11.99
One of the great late 70s Columbia sets from the Earth Wind & Fire side of the universe – the one and only album by this obscure west coast group, who get some strong help in the studio from Phillip Bailey! Bailey co-produced, and wrote some great songs for the record – and the ... CD

Too Hot To Stop It
CBS/PTG (Netherlands), 1985. New Copy
CD...$10.99
A different sound than the Manhattans of the 70s – but a set that's still got some wonderful harmonies throughout! The production has a modern sort of 80s crackle – more beats and keyboards than before, but also some standout acapella moments that hearken back to an old school style of ... CD

Satisfy My Soul – The Complete Recordings 1964 to 1968
Decca/RPM (UK), Mid 60s. New Copy
CD...$6.99 13.99
Great work from soul singer Ronnie Jones – an artist who was born in the US, but cut all of this work in the swinging London scene of the 60s – where he was obviously a very big addition to the mod scene! Ronnie's got a voice that's capable of a great range when needed, but which can ... CD