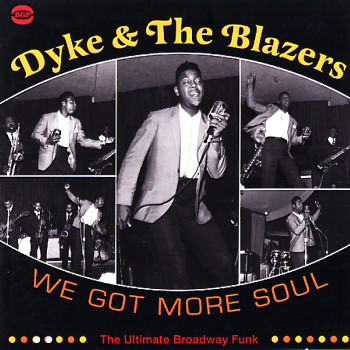 The best collection we've ever seen of the work of funky soul legends Dyke & The Blazers – a double-length set that features full, unedited versions of their classics – plus a whopping batch of previously unreleased tunes! Dyke & The Blazers had a groove that was mighty solid back in the late 60s – a hard-vamping, tightly rhythmic groove that easily matched the best early funk of the time from Charles Wright, Sly Stone, or James Brown – and which was often served up with a rougher edge, and an overall sound that was a lot more dangerous! However, many of the group's singles really trimmed down their performances – shaving off key instrumental moments that are lovingly re-attached here, and combining them with some even rarer tracks that never saw the light of day back in the 60s. The whole thing's amazing – and the 2CD set features a whopping 33 tracks in all, split into one disc of material recorded in Phoenix, and one more of tracks from Hollywood! Titles include "Black Boy", "Stuff", "Moon", "Booga Jivin", "Runaway People", "Funky Broadway Time (parts 1 & 2)", "Swamp Walk", "Extra Funk", "Let A Woman Be A Woman Let A Man Be A Man", "Soul Cake", "She Knows It", "Let's Do It Together", "Bring It On Back", "Funky Walk (parts 1 & 2)", and "Triple Funk".  © 1996-2022, Dusty Groove, Inc.