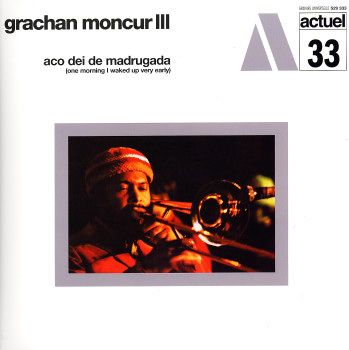 Essential stuff – and one of a few albums recorded for BYG/Actual by trombonist Grachan Moncur III – some of his best work after his initial classics for Blue Note! The album features Moncur fronting a European rhythm section – performing one side of interpretations of Brazilian folk tunes: "Aco Dei De Madrugada" and "Ponte Lo"; and another of two originals: "Osmosis" and "Tiny Temper". Anyone familiar with Moncur's style can't help but appreciate his coloristic slides and slurs, or his marvelous textural splashes of tone, or his individual phrasing, shaped more by his unique vision than any standard trombone slide or valve brass tradition. While his wonderful Blue Note sides were very modernist, these BYG sessions find Moncur at his most expansive – more groundbreaking work from one of our favorite "new thing" artists!  © 1996-2021, Dusty Groove, Inc.