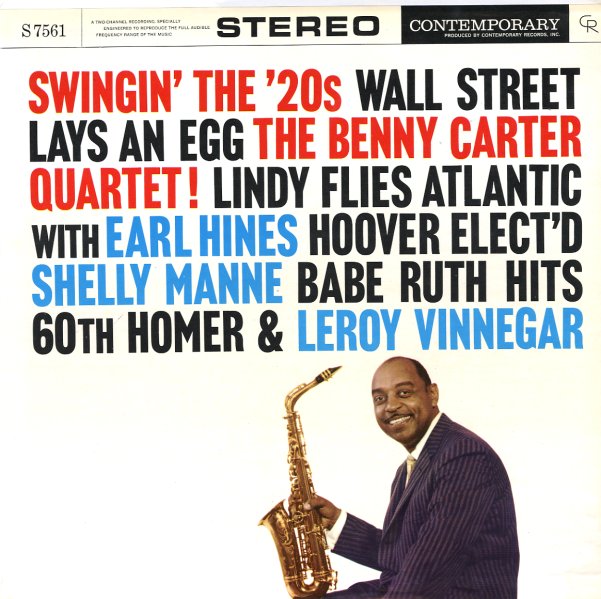 Benny Carter swings material from the 20s – but the results are a lot better than you might expect! We'll be honest in saying that the cover and theme of this one always made us figure the record was some sort of "old timey" affair – but Benny's surprisingly cool on the record, and is working in a small group mode that may well be even more deftly compelling than his earlier combo sides for Verve! The group here is only a quartet – with Benny on alto and trumpet, Earl Hines on piano, Leroy Vinnegar on bass, and Shelly Manne on drums – and it's possibly the modern rhythm section that gives the record a nicely soulful groove, and lets the tunes come off as more than just rehashed classics. Carter's tone on the alto is great – and very nicely recorded, with that edge that was showing up strongly in these later years – and titles include "Laugh Clown Laugh", "Thou Swell", "Who's Sorry Now", "A Monday Date", "Someone To Watch Over Me", "In A Little Spanish Town", and "Mary Lou".  © 1996-2021, Dusty Groove, Inc.
(70s yellow label pressing.)

Benny Carter – Live & Well In Japan
Pablo, 1977. Near Mint- Gatefold
LP...$6.99
A live set very much in classic Verve mode – produced by Benny himself, and recorded in Tokyo in 1977 with a group that includes Budd Johnson on tenor and soprano, Cecil Payne on baritone, Cat Anderson and Joe Newman on trumpet, Britt Woodman on trombone, Nat Pierce on piano, Mudell Lowe on ... LP, Vinyl record album