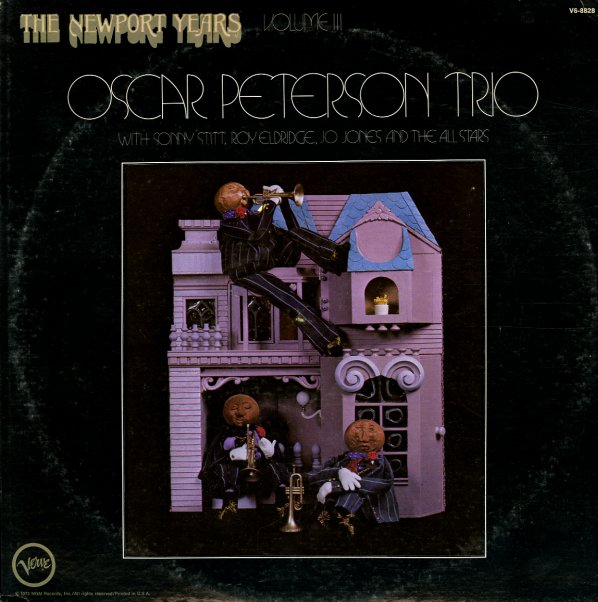 One of the classic Verve series of recordings from the 1957 Newport Jazz Festival, and an album that features one side of the Oscar Peterson trio with Ray Brown and Herb Ellis, plus a side of the trio joined by Jo Jones, Sonny Stitt and Roy Eldridge. 8 tracks in all, including "Will You Still be Mine", "Joy Spring", "Gal In Calico", "52nd Street Theme", "Monitor Blues", "Willow Weep For Me", "Autumn In New York" and "Roy's Son".  © 1996-2021, Dusty Groove, Inc.
(Cover has a cut corner, light wear, and some aging.)

West Side Story
Verve, 1962. Near Mint-
LP...$9.99
The West Side Story score – but handled here by the great Oscar Peterson Trio – in ways that really push the tunes past their Broadway roots! The approach is tight, soulful, and filled with strong lines from Peterson on piano – plus bass by Ray Brown and drums from Ed Thigpen ... LP, Vinyl record album

Eloquence
Limelight, 1965. Very Good Gatefold
LP...$11.99
A sprightly mid 60s session from the Oscar Peterson Trio – one of the last live recordings from the famous lineup that featured Ray Brown on bass and Ed Thigpen on drums! The performance was captured at the Tivoli Gardens, in Copenhagen – and recorded in an open style that really gets ... LP, Vinyl record album