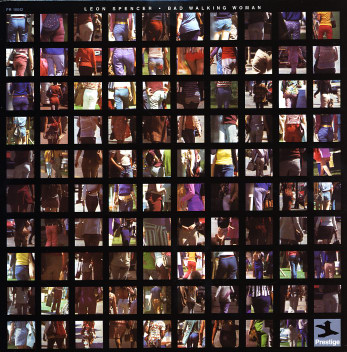 Supremely heavy work from organist Leon Spencer – one of his classic jazz funk sessions for Prestige Records, and a record that shows him opening up his sound a bit more than before! The album has Spencer working in a few different lineups – some with small groups that feature Melvin Sparks on guitar and Idris Muhammad on drums – others with some slightly larger instrumentation and even a bit of strings, used in a sophisticatedly soulful style that reminds us a bit of CTI or Kudu backings of the time! Billy Ver Planck handles the larger arrangements, but even on these Leon's organ is right out front in the mix – really dominating the tunes, and soaring over the top with a newly fluid style that reminds us of Charles Earland at his own best during this time. Titles include the killer funky title cut – "Bad Walking Woman" – plus "When My Love Has Gone", "In Search Of Love", "Down On Dowling Street", "Hip Shaker", and "Bad Walking Woman". Cool cover, too, with a huge collage of photos of the backsides of exactly 99 "bad walking women"!  © 1996-2022, Dusty Groove, Inc.