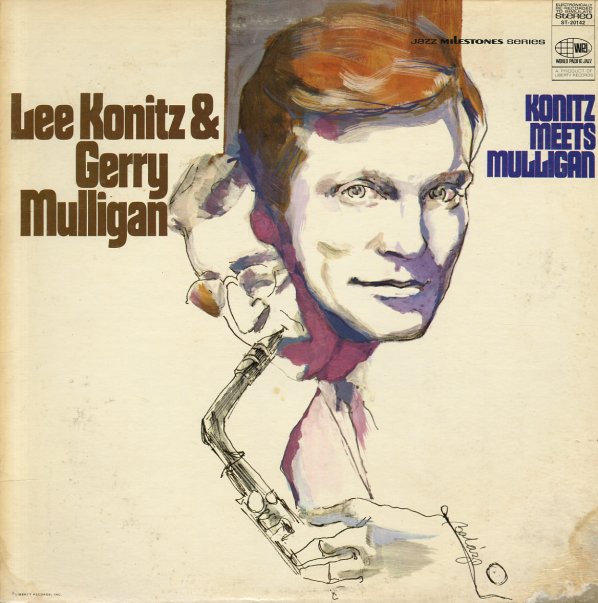 A set that's noteworthy not just for the presence of alto saxophonist Lee Konitz, and for the leadership of baritonist Gerry Mulligan – but a record that also features the great Chet Baker on trumpet, working here as part of a trio of musicians who were really helping transform the sound of jazz in the early 50s! And maybe most noteworthy in the set is the lack of any piano at all – a strategy of Mulligan's at the time, but used in a way that also echoes some of Lee's sublime quartet sessions of the mid 50s too – and a nice setting for Chet, as he has plenty of space to open up and craft those magical notes of his youth! The rest of the group features Larry Bunker on drums, and either Carson Smith or Joe Mondragon on bass – and material was recorded partly live, and partly in the studio – with titles that include "Broadway", "Sextet", "Almost Like Being In Love", "Too Marvelous For Words", "Lover Man", "I'll Remember April", and "All The Things You Are".  © 1996-2022, Dusty Groove, Inc.
(Late 60s issue. Cover has light wear and a small split on the top seam.)

Lee Konitz Plays With The Gerry Mulligan Quartet
World Pacific, 1953. Good
LP...$5.99 (LP...$31.99)
A set that's noteworthy not just for the presence of alto saxophonist Lee Konitz, and for the leadership of baritonist Gerry Mulligan – but a record that also features the great Chet Baker on trumpet, working here as part of a trio of musicians who were really helping transform the sound of ... LP, Vinyl record album

Planet Love
World Pacific, Late 60s. Very Good+ Gatefold
LP...$13.99
One of the first albums from the great Ernie Watts – very different than some of his later work, with a sharp edged, soulful vibe! Ernie blows alto and tenor, in a quartet that also features Clarence McDonald on piano, Stanley Gilbert on bass, and Robert Morin on drums – and titles ... LP, Vinyl record album

Perfect Percussion
World Pacific, 1961. Very Good+
LP...$19.99
A great record from these cool percussion players – with wonderful backing from The Montgomery Brothers! Both Roy Harte and Milt Holland were LA players who did a lot of studio work, played on exotic records, but could also handle a bit of jazz when they wanted to – and you get a taste ... LP, Vinyl record album

Mercy Mercy – Live At Caesars Palace
World Pacific, Late 60s. Sealed Gatefold
LP...$13.99 16.99
Buddy at his soulful late 60s best – not content to keep in the same groove as older years, and working here with a great lineup that includes some excellent younger players! Charles Owens is in the group on alto, and the set also features work by Don Menza on tenor, Art Pepper on alto, Pat ... LP, Vinyl record album