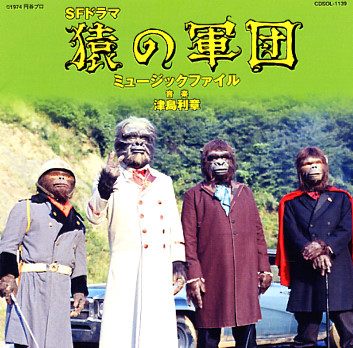 Really crazy soundtrack work – recorded for what looks to be a Japanese version of The Planet Of The Apes! The music is an insane blend of modes – bits of percussion, sound effects, odd electronics, and other unusual sounds – often used in tight, rhythmic ways over a series of very short tracks that are almost like "cues" for the action on screen! Most numbers are under 2 minutes long – and the CD features a whopping 56 tracks in all – some of which have a western-esque feel, others an action one, and others still a weirdly jazzy or sci-fi style. Very odd stuff, and the notes are all in Japanese – so there's not much more we can tell you – but the music is pretty darn compelling, and so is the cover!  © 1996-2021, Dusty Groove, Inc.