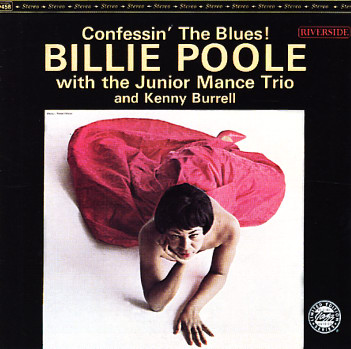 The title's an apt one, because Billie Poole sings here in a mode that's steeped in styles borrowed strongly from gospel and blues – but delivered more in a jazz-based mode overall! The backing here is one aspect that makes the record especially strong – a quartet with Kenny Burrell on guitar, Junior Mance on piano, Bob Cranshaw on bass, and Mickey Roker on drums – all grooving in a rollicking 60s soul jazz way that brings more life into Billie's music than it might otherwise have, ensuring that most numbers stay away from cliche. Titles include "Them Blues", "I Worry Bout You", "When Your Well Runs Dry", "Ain't That Love", "The Man That Got Away", and "Jailhouse Blues".  © 1996-2021, Dusty Groove, Inc.
(Blue label Bill Grauer Productions Inc pressing, RM 458, with microphone logo and deep groove. Cover has some wear, with a mostly split spine.)

That's How I Love The Blues
Riverside, 1962. Very Good
LP...$11.99
Given what a freewheeling, open-minded, and lyrical jazz singer Mark Murphy is, it's hard to imagine him really loving "the blues" – and fortunately, most of that love is extended in the title, because the album itself is less of the blues effort that you might think. True, the ... LP, Vinyl record album

Only These People Are Permitted To Buy This Album
Riverside, Early 60s. Very Good+
LP...$4.99
One of the most unusual albums on the Riverside label – an obscure outing from vocalist/pianist Ralph Strain – presented with a cover that lists the names of all the people who are permitted to buy the record! We're guessing that Riverside allowed unlisted folks to buy the record ... LP, Vinyl record album