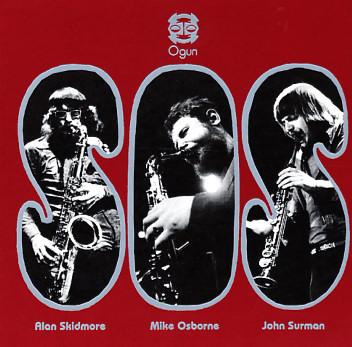 One of our favorite sides of the British avant scene in the 70s – a body of work that's out, but never too out – soaring on spiritual wings one moment, and working in playful blocks of sound the next! All three artists play saxes on the album – tenor for Akan Skidmore, alto for Mike Osborne, and baritone and soprano saxes for John Surman – while Skidmore also throws in a bit of drums and percussion, and Surman a bit of electronics – making for a multi-horn approach that's got some of the same compelling elements as the Lol Coxhill albums on Virgin, but performed here with a freer sort of soul as well! There's maybe a lot more warmth here than some of Surman's colder electronics/reeds records for other labels – and titles include "Goliath", "Ist", "Calypso", "Cycle Motion", "Chordary", and "Wherever I Am".  © 1996-2023, Dusty Groove, Inc.