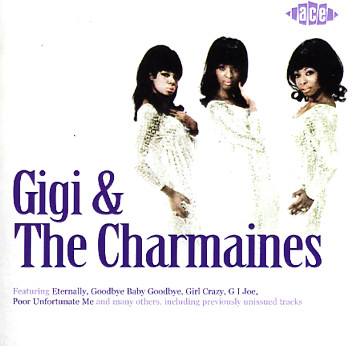 A long-overdue collection of work by this sublime Ohio soul group of the 60s – a trio of lovely ladies with a really tremendous sound! Gigi & The Charmaines are hardly the girl group cliche you might think from their sweet name and the image on the cover – and on most of the numbers here, they're hard-rolling at a pace that's somewhere between the best Detroit Northern Soul of the time, and some of the sweeter female soul that was coming out of Chicago at the end of the 60s. Ace have really outdone themselves with the collection – and bring together the group's singles on the Columbia, Date, and Fraternity labels – as well as some other key sides that have them performing vocals on records by other artists in the lead! CD features a whopping 28 tracks in all, plus a full set of notes – with titles that include "Guilty", "Poor Unfortunate Me", "Eternally", "Girl Crazy", "If You Ever", "I Idolize You", "Rockin Old Man", "On The Wagon", "What Kind Of Girl Do You Think I Am", "All You Gotta Do", "GI Joe", "I Can't Go On This Way", and "I Don't Want To Lose Him" – plus "I'm So Satisfied" with Max Falcon, "Lucy Miloo" with Kenny Smith, "Baby Please Don't Go" with Carl Edmonson, and "Baby What's Wrong" with Lonnie Mack.  © 1996-2022, Dusty Groove, Inc.