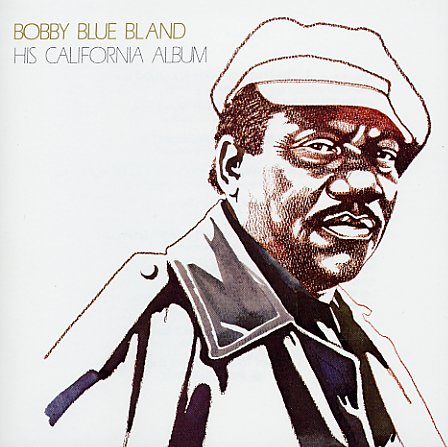 A nice little record from Bobby Blue Bland – quite different from his 60s sides for Duke/Peacock, and recorded in California (as you might guess from the title!) with a smoother more soulful approach that comes off surprisingly well! The style works well for Bobby – and kind of gave him a new lease on life during the 70s, as he mixed his rougher bluesy vocals with some hipper arrangements – still quite deep in soul, but with a compressed sound that creates a new mode of expression. Titles include "Goin Down Slow", "Up & Down World", "Help Me Through The Day", "Where My Baby Went", "Friday The 13th Child", "This Time I'm Gone For Good", and "I've Got To Use My Imagination".  © 1996-2022, Dusty Groove, Inc.
(In the textured cover, with light wear, aging.)

Sweet Vibrations
MCA, 1980. Sealed
LP...$1.99 9.99
Bobby Bland is one of those rare talents that never lost his groove, even as the years went on – maybe a bit like The Dells, in that he started out in the earliest days of soul music, but then was able to shift with the styles and the times, all without ever giving up the vocal strengths that ... LP, Vinyl record album

Call On Me/That's The Way Love Is
Duke, 1963. Very Good
LP...$11.99 (CD...$8.99)
One of Bobby Blue Bland's best albums ever – a stunning mix of blues and soul that's the kind of killer stuff that will make you a fan of his forever! There's no beating Bland at this point in his career – and the record is one of the finest illustrations of the power he brought to his ... LP, Vinyl record album

Two Steps From The Blues
Duke, 1961. Very Good+
LP...$11.99
An incredible record from Bobby Blue Bland – and quite possibly the greatest one he ever made! The set's got an amazing something special that's unlike most other material of the time – a bit blues, but a lot of soul too – still with some echoes of R&B in the jazzier charts ... LP, Vinyl record album

Electric Mud
Cadet, 1968. Very Good+ Gatefold
LP...$59.99
A really fantastic chapter in the career of the great Muddy Waters – a set that was initially dismissed as "inauthentic", but which has gone on to much-deserved fame over the years! Part of the genius here is the great Charles Stepney – that hip Chicago arranger who did so ... LP, Vinyl record album